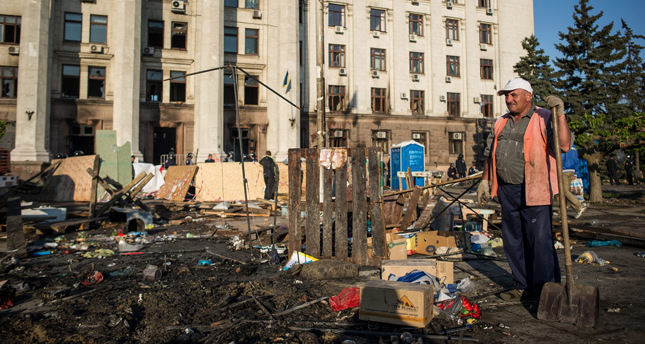 by May 03, 2014 12:00 am
SLAVYANSK — Ukraine on Saturday expanded a military operation to seize ground from rebels in the east, following the bloodiest day in the country since the Western-backed government in Kiev came to power. Interior minister Arsen Avakov said his forces had launched a dawn raid near the town of Kramatorsk, taking back a TV tower as Kiev struggles to wrest back control of the east amid a pro-Russian insurgency that threatens to tear the country apart.

Saturday's fresh assault came after the deadliest day in months in crisis-hit Ukraine, with dozens killed in clashes and a fire in the southern port city of Odessa and at least nine killed during a military raid on the flashpoint town of Slavyansk. As the violence on the ground boiled over, the war of words between Moscow and Washington also intensified. The stakes are rising in the worst East-West crisis since the end of the Cold War.

Russia said Ukraine was heading for "catastrophe" and urged it to stop "waging war against its own people". Moscow's envoy to the UN Security Council told a hastily called meeting that Kiev was responsible for the chaos and accused the West of backing it.

Moscow has also declared a peace accord signed last month in Geneva, which was meant to defuse the crisis, a dead letter. US President Barack Obama meanwhile increased the pressure on President Vladimir Putin, threatening to whack Moscow with its toughest sanctions yet if Russia continued to destabilise its former Soviet republic neighbor.


Avakov said the "active phase" of the operation to clear rebels from the east continued at dawn in Kramatorsk, just 17 kilometres (10 miles) to the south of Slavyansk.

"Overnight, forces participating in the anti-terrorist operation in Kramatorsk took control of the TV tower that was previously held by the terrorists," said the minister.

He said two rebel checkpoints near the airport had been destroyed. On Friday, after several days of encircling Slavyansk, the Ukrainian military launched what rebels in the town called a "full-scale" assault with helicopters and armoured vehicles overrunning nine rebel checkpoints. Two Ukrainian army personnel were killed in the action as rebels shot down two helicopter gunships. Two more died in later fighting, authorities said.

Insurgents said that three of their number and two citizens had died in the operation on Friday. On Saturday, the centre of Slavyansk was calm, an AFP reporter on the scene said, with people going about their daily business, although sporadic explosions and small-arms fire were heard during the night. The violence in Ukraine, which had previously been limited to the southeast and east of the country, spread to the southern port city of Odessa on Friday, marking a new front in the chaos.
Following clashes between pro-Russian militants and supporters of Ukrainian unity, dozens were killed in a fire in a building that local media said was full of pro-Moscow militants.

Most died from smoke inhalation, while others perished trying to escape by jumping out of windows. Local officials on Saturday gave an updated toll of 37 dead and 200 injured -- including 22 police officers -- and 130 arrests, making it the bloodiest day in Ukraine since deadly protests in Kiev that in late February swept aside the former pro-Moscow president Viktor Yanukovych.

Russia said it was "outraged" by the incident and called on Kiev and the West to "end the anarchy", blaming the Ukrainian authorities for "criminal irresponsibility". State Department deputy spokeswoman Marie Harf said the loss of life in Odessa, which had previously been spared the chaos in other parts of the country, was "heartbreaking". "The violence and mayhem that led to so many senseless deaths and injuries is unacceptable," she said.


As the West sought to pile the pressure on Putin, Obama and German Chancellor Angela Merkel said the West was ready to target the recession-hit Russian economy with fresh measures if Moscow continued its "destabilisation" of Ukraine.

"If in fact we see the disruptions and the destabilisation continuing so severely that it impedes elections on May 25, we will not have a choice but to move forward with additional... severe sanctions," Obama said at a joint news conference with Merkel.

"If Russia continues on its current course, we have a range of tools at our disposal, including sanctions that would target certain sectors of the Russian economy."

Previously, the administration had said such measures would only come into force if Russia sent its estimated 40,000 troops over the border. Russia made its own economic threats on Friday, warning that the state-run gas firm Gazprom could restrict flows to Ukraine -- and by extension several other European countries - if Kiev did not pre-pay its bill for June by the end of the month. In a sign of worsening relations, US Secretary of State John Kerry announced he postponed a phone call with Russian Foreign Minister Sergei Lavrov.
Meanwhile, efforts continued to secure the release of seven European monitors from the Organisation for Security and Cooperation in Europe (OSCE) held for more than a week in Slavyansk.

Merkel said the release of the men -- four Germans, a Dane, a Pole and a Czech -- would be "an important step" in easing the tensions.
The unrest in Ukraine, which began after a deadly crackdown on pro-EU protests against the regime of former president Yanukovych, has rapidly escalated into the worst geopolitical crisis in years. Moscow reacted furiously to the ousting of Yanukovych and annexed the peninsula of Crimea after a disputed referendum. Ukraine has put its estimated 130,000 troops on full combat alert and reintroduced conscription amid fears that the Kremlin could order an invasion.