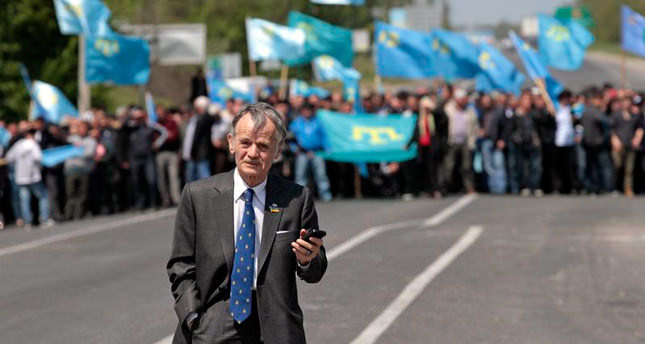 by AA May 04, 2014 12:00 am
SIMFEROPOL, Ukraine — Crimean Tatar leader Mustafa Cemil Dzhemilev (Kırımoğlu) has returned to Kiev after he was denied entry into the Crimean peninsula by Russian forces.

He had been barred on Friday from entering Russia via a Moscow Airport, having to use land transport through Kiev to reach the peninsula.

Welcomed by thousands of Crimean Tatars who were expecting him to come in Crimea, Kırımoğlu failed to go in through the checkpoint, saying he would return to the Ukrainian capital.

Tatars climbing over the roadblocks met Kırımoğlu (Dzemilev) in a buffer zone after he passed the checkpoint on the Ukrainian side. Upon this incident, Russian soldiers reportedly called for back-up and closed the border gate.

Kırımoğlu (Dzhemilev) urged for calm among his supporters, calling on them to continue a non-violent struggle against the 'existing regime.'

At the border on Saturday, Russian troops fired into the air, not letting thousands of Crimean Tatars - including President of the National Assembly, Rifat Chubarov and Crimean Deputy Prime Minister, Lenur Islamov - pass the Armyansk checkpoint.

On March 21, Russian President Vladimir Putin signed into law the annexation of Ukraine's strategic peninsula of Crimea. The move followed a March 16 referendum in Crimea where around 97% of voters chose to secede from Ukraine and join Russia. The United States, the European Union and Ukraine regard the vote as "illegitimate."