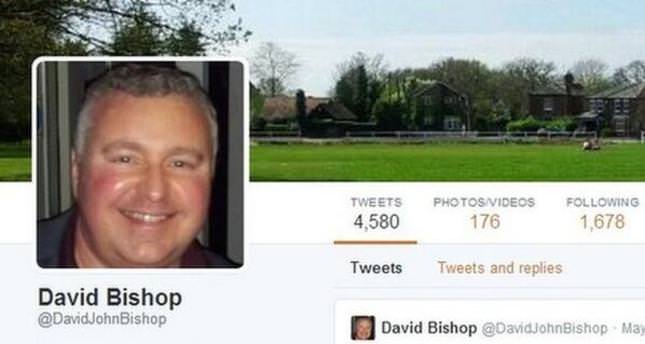 by Anadolu Agency May 04, 2014 12:00 am
BRENTWOOD, U.K. — David Bishop, a candidate in Brentwood South, Essex, has quit the party after posting anti-Islamic and homophobic sentiments on Twitter. "I have let myself and my party down," Mr. Bishop said in a statement.

It comes after a UKIP council candidate, who tweeted that Islam was "evil", was suspended from the party. Mr. Bishop, who is also a DJ in the Brentwood area, retweeted one message on 13 April that read: "How CAN a gay guy keep a straight face?"

In a statement, Mr Bishop apologized "for the real offence caused" and said he would "not be asking anyone to vote for me on May 22".

"I recognize that someone standing for public office should show leadership and seek to unite communities, not divide them. I hope the residents of Brentwood South can forgive my lack of judgment in time," he said.diversity soldiers we get it, now stop trying so hard £pathetic."

The association chairman in Brentwood and Ongar, where Communities Secretary Eric Pickles is the MP, said he had accepted the resignation and it was the "right decision".


Meanwhile, the Conservatives distanced themselves from views expressed on Twitter by Stephen Lees, who claims to have been a long-standing activist in the Croydon area of south London.