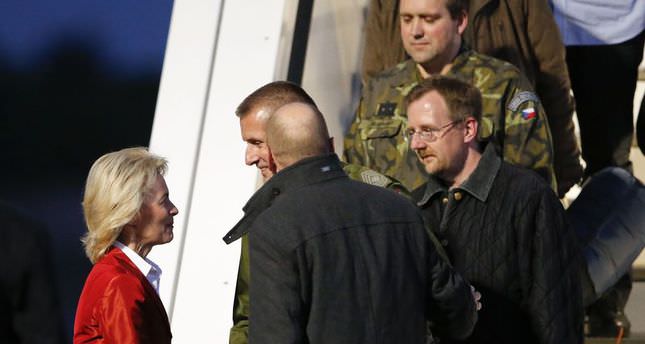 by May 04, 2014 12:00 am
BERLIN — Seven European monitors who were released in eastern Ukraine after being held by pro-Russian groups for eight days arrived in Berlin on Saturday night.

Defense ministers of Germany, Denmark and the Czech Republic welcomed the released Organization for Security and Co-operation in Europe observers upon their arrival in the German capital.

"The best answer to violence is our unity," said Czech Defense Minister Martin Stropnicky. "I hope that we will be able to make progress in finding a diplomatic solution to the Ukrainian crisis."

The kidnapped group consisted of seven military observers from Germany, Czech Republic, Denmark, Poland and Sweden as well as five Ukrainian officials accompanying them. They were seized by pro-Russian gunmen on April 25 on their way from Kramatorsk to Donetsk in eastern Ukraine and were held in Slovyansk for eight days before being released on Saturday.

Government buildings and police stations in several eastern Ukraine cities remain under the control of armed pro-Russia groups, including a prosecutor's office building in Donetsk. The Ukrainian government launched an operation on Friday to regain control in restive cities.