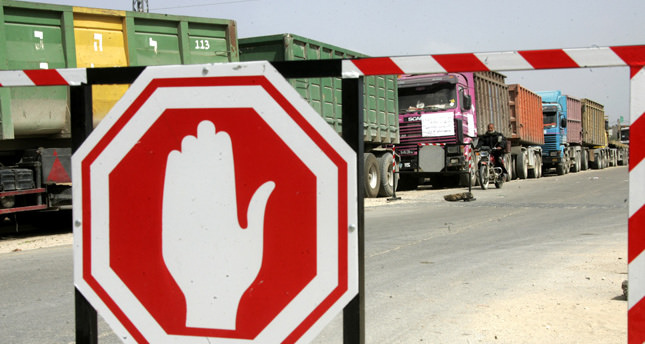 by AA May 05, 2014 12:00 am
CAIRO — Israel on Monday closed the Karam Abu Salem commercial crossing linking it with the southern Gaza Strip, a Palestinian border official has said.

Israel on Monday closed the Karam Abu Salem commercial crossing linking it with the southern Gaza Strip, a Palestinian border official has said.

"Israeli authorities have decided to close the Karam Abu Salem crossing on Monday and Tuesday on the occasion of the Jewish holidays," Mounir Ghalban, director of the Palestinian side of the border terminal, told Anadolu Agency.

"The closure will disrupt the flow of goods into the enclave and will worsen Gaza's already dire economic and humanitarian situation," he added.

The closure of Karam Abu Salem in recent days has led to a fuel crisis inside the blockaded strip.

Home to roughly 1.8 million people, the coastal enclave has six border crossings with Israel and one with Egypt.

Since Palestinian resistance faction Hamas seized control of the strip in 2007, Israel has closed four of its Gaza crossings, leaving only the Karam Abu Salem and Erez crossings open to limited traffic.