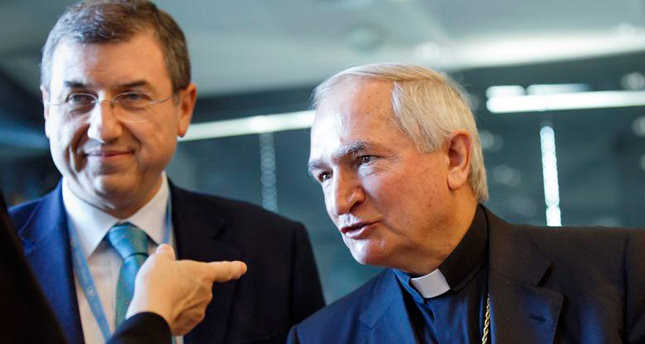 by Anadolu Agency May 05, 2014 12:00 am
GENEVA — In its second grilling at the United Nations this year, the Vatican on Monday sought to limit its responsibility for the global priest sex abuse scandal .

Archbishop Silvano Tomasi, the Vatican's U.N. ambassador in Geneva, lost no time asserting that its responsibility for enforcing the U.N. treaty against torture only applies within the confines of the tiny Vatican City.

"The Holy See intends to focus exclusively on Vatican City state," he told the committee. "State authorities are obligated to protect and when necessary to prosecute persons under their jurisdiction."
Committee member Felice Gaer's first question was to ask why the Vatican's first report to the committee — the subject of the hearing this week — came nine years late.

Gaer, an American human rights expert, then took aim at the church's "alleged distinction" between Vatican City and the Holy See.
A U.N. committee that monitors a key treaty on children's rights blasted the Holy See in January, accusing it of systematically placing its own interests over those of victims by enabling priests to rape and molest tens of thousands of children through its own policies and code of silence. And that committee rejected a similar argument the Vatican made trying to limit its responsibility.

If a U.N. committee finds the abuse amounts to torture and inhuman treatment, that could open the floodgates to abuse lawsuits dating back decades because there are no statute of limitations on torture cases, said Katherine Gallagher, a human rights attorney for the Center for Constitutional Rights, a nonprofit legal group based in New York. The group submitted reports on behalf of victims to both committees urging closer U.N. scrutiny of the church record on child abuse.

The U.N. committee, which is composed of independent experts, not other U.N. member states, will issue its final observations and recommendations May 23.