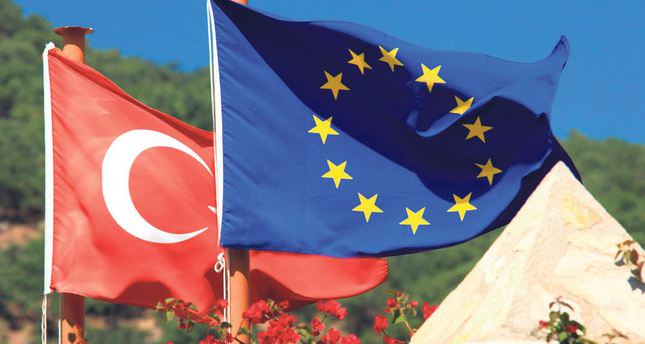 Turkish Foreign Minister Ahmet Davutoğlu participates in the annual meeting of the Committee of Ministers of the Council of Europe in Vienna.

According to the press release from the Council of Europe, the main theme of the meeting will be "Council of Europe Values and Stability in Europe: Current Challenges." A report prepared by Secretary General Thorbjørn Jagland, entitled "State of Democracy, Human Rights and the Rule of Law in Europe" will be discussed during the first session. Securing the long-term effectiveness of the system of the European Convention on Human Rights, cooperation with the European Union and the policy of the Council of Europe toward neighboring regions will also be taken into consideration.

The crisis in Ukraine will be discussed informally at a lunch between the ministers. Among 47 member states, both Russia and Ukraine are also members of the Committee of Ministers of the Council of Europe. How the ministers will approach the Ukrainian crisis is expected to signal the overall attitude of European countries toward the ongoing crisis in Ukraine. The tension between Russia and Western-backed Ukraine's interim government would also reflect itself in the meeting.

The reaction between two countries on the crisis is also a matter of concern. Considering the possible effect of this meeting on the existing relation between the EU and Turkey, the strained affairs with Germany, due to German President Joachim Gauck's unfair statements about Turkey's current political atmosphere, is expected to have influence on the meeting. In his speech at the Middle East Technical University (METÜ), Gauck sharedhis concerns over Turkey's future while criticizing the Turkish government and increasing the tension between Germany and Turkey.

It is expected that German Federal President Joachim Gauck's speech at the Middle East Technical University (ODTÜ) created tension between Germany and Turkey. In his speech, he stated his concerns over Turkey's future while criticizing the Turkish government.
Turkish Prime Minister Recep Tayyip Erdoğan gave his immediate reaction against Gauck's statements. "We cannot tolerate anyone to interfere in our domestic affairs. We should duly execute what statesmanship requires," said Erdoğan. The tension with the German president may define the atmosphere at the Vienna meeting. Can Baydarol, Turkey-EU relations analyst, said there are two areas to focus on. The first is European Union's concerns over the Copenhagen criteria and the long process of Turkey's eligibility for accession to the EU. The second one is the Turkish government's policy against intervention by any EU member states into its domestic politics with the aim of examining Turkey's compliance with the Copenhagen criteria.

With regard to Europe's attitude toward Turkey, it can be concluded that the efforts of the Turkish government to stay on the European agenda has been highly appreciated by European officials. "Progress was indeed made last year in Turkey. The fourth judicial reform package and the democratization package were adopted.

The regional policy chapter was opened. Talks on visa liberalization started and the readmission agreement was signed. All this gave fresh momentum to our cooperation and proved a strong desire of both sides to advance further," stated Commissioner for Enlargement and European Neighborhood Policy Štefan Füle, on Feb. 10 in Brussels during the ministerial dialogue with Turkish Minister of Foreign Affairs Ahmet Davutoğlu and Minister for EU Affairs and Chief Negotiator Mevlüt Çavuşoğlu. In addition to past achievements, the participation of Davutoğlu in the Vienna meeting proves the Turkish government is on track for EU accession in the long run despite the slow progress.

The meeting will be held on the occasion of the 65th anniversary of the foundation of the Council of Europe. After Austria's six-month chairmanship from November 2013 to May 2014, Minister of Foreign Affairs of Azerbaijan Elmar Mammadyavrov will present the priorities of his country's chairmanship which will start on May 14.