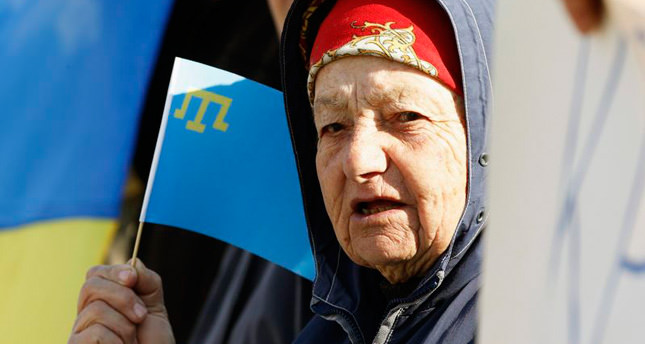 by AA May 07, 2014 12:00 am
BERLIN — Member of the Tatar Mejlis has called for help from Turkey and the international community, saying his people's situation is desperate.

Abdurrahman Egiz, a member of the Tatar Mejlis in Crimea, said that since Russia's annexation earlier this year of Crimea the rights of his people had been endangered and a mass deportation was possible. In particular, he called on Turkey -- a powerful country of nearly 80 million people of whom most are the Tatar's ethnic cousins -- for support.


"The whole incident in the Ukraine affects us," said Egiz. The mejlis is the Crimean Tatars' highest exectuive body between meetings of the Qurultay, or national congress.

"The leader of the Crimean Tatars, Mustafa Dzhemilev Kırımoğlu, has been banned from entering Crimea. More than 2,000 people and Kırımoğlu can't enter Crimea and are waiting at the border, confronted with armed troops."

Kırımoğlu, a member of the Ukrainian parliament, is regarded by the Crimean authorities as an ally of the Ukrainians and is known for his support of the country and the West.

The Crimean Tatars have faced mass deportation. A Turkic people Crimean Tatars forcibly expelled to Central Asia by Stalin during World War II, many only able to return after the fall of the Soviet Union in 90s.

But Egiz says his people are once more in danger: "We demand the help of the international community to protect our rights." "This is very important for us because we are in a very difficult situation. Tatar leader, Abdulcemil Kırımoğlu, is not able to enter Crimea. This is symbolic of our situation."

"Discrimination is possible." he said. To create conditions that would force Crimean Tatars to leave the area is also possible. In such a case, people would not be able to stay there."

"Turkey is for us, in terms of history and religion, a brother state," Egiz said. "Because of this we want Turkey to play a leading role. We believe that Turkey will take advantage of all opportunities and continue supporting our case."

He also appealed to the international community as a whole.

"If you want to help us, you can ask the Russian Federation to take their troops out of Crimea," he said.

Mykhaylo Yakubovych, a Ukrainian scholar of Islam from the National University of Ostroh in the Ukraine, said the situation in the Crimea was "perilous".

"More than 10,000 Crimean Tatars have left their homes," Yakubovych said, "but the majority continues to live there."

He said freedom of movement was a problem for them and they could not move to European Union states because of difficulties with visas. Yakubovych said that, before the occupation of the Crimea, there were many pro-Russian groups who committed a great deal of vandalism.