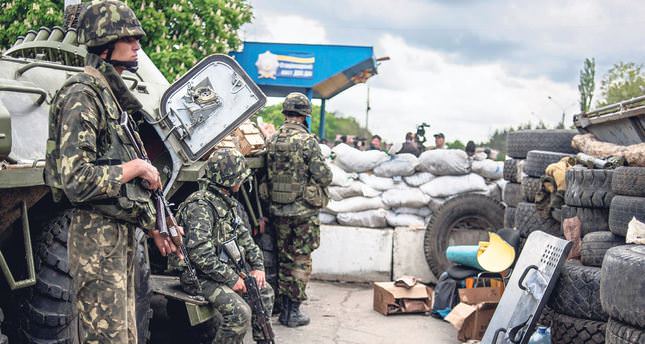 He said that rebel fighters included several from Russia and Chechnya as well as Crimea, annexed by Moscow in March.

Meanwhile, European foreign ministers met in Vienna yesterday for a diplomatic push to defuse the Ukrainian crisis. British Foreign Secretary William Hague said the annual meeting of the Council of Europe's foreign ministers should send a message to Russia not to interfere in this month's presidential election in Ukraine. "Russia is clearly intent on disrupting and preventing the elections," Hague said before the meeting.

Ukrainian Foreign Minister Andrii Deshchytsia said his country is looking for a strong statement in support of the May 25 election from the 47 member states of Europe's oldest human rights watchdog. French President Francoise Hollande warned that without an election, Ukraine risked a civil war. "If [the election] does not go ahead, there will be chaos and the risk of a civil war," he told the BFM TV news channel. "We're nearly there." Hollande charged that Russian President Vladimir Putin does not want the election to go ahead. "It's up to us to convince him," Hollande said, adding that it was in Russia's interest that the election takes place.

Russian Foreign Minister Sergei Lavrov said on Tuesday it would be "unusual" to hold a presidential election in Ukraine while the army was deployed against Ukrainians. Lavrov's comments, after a meeting of the Council of Europe human rights organization in Vienna, suggested Moscow could be preparing a reason to question the legitimacy of the May 25 election if it is unhappy with the outcome.

"Holding elections at a time when the army is deployed against part of the population is quite unusual," he told a news conference in response to a question about whether Moscow would recognize the vote. "We will see how this process ends." Lavrov said Ukraine should agree on a new constitution to define presidential powers before citizens cast their ballots.

Russia annexed the Crimea region from Ukraine in March and does not recognize the government that took power in February after Ukraine's pro-Moscow president was ousted.

The West accuses Moscow of trying to destabilize its fellow former Soviet republic by fomenting separatist unrest in the Russianspeaking east, which could also be used by Russia as possible grounds to withhold recognition of the election. Russia denies the accusations and says the West and the new, pro-Europe authorities in Kiev have aggravated the crisis.

Asked about a German proposal to hold a second international meeting on Ukraine, Lavrov said the agreements reached during the first round of talks in Geneva had still not been implemented. "Meeting in the same format, when opposition to the current Ukrainian regime will be absent at the negotiating table, would hardly add [anything]," he said. "One could possibly do it but we would be going around in circles again saying that one needs to carry out what we had agreed on.

And it's the Ukrainians who should deliver, both the regime and those opposing it." Meanwhile, the United Nations High Commissioner for Human Rights on Tuesday urged all sides in Ukraine to make a greater effort to find a peaceful resolution to the current crisis. The U.N. call came as Germany's Foreign Ministry warned its citizens in southern and eastern regions of Ukraine to leave the country. "We are deeply concerned by the surge in violence in Ukraine, which is resulting in more and more death and destruction," Commissioner spokesman Rupert Colville told a Tuesday press conference in Geneva. Colville said the government in Kiev must ensure that military and police operations are undertaken in line with international standards. The country's pro-Russian separatists were urged to disarm and stop occupying official buildings.

"Armed opposition groups must stop all illegal actions, including detaining people and seizing public buildings in violation of Ukraine's laws and constitution. These organized and well-armed groups should lay down their weapons, free arbitrarily detained persons and vacate occupied public and administrative buildings," Colville said. The UNHCR spokesman also called for an investigation into events in the regions of Odessa and Donetsk which led to dozens of deaths in recent days, including a fire at an Odessa trade union building last Friday in which more than 40 people are believed to have perished.
Last Update: May 07, 2014 2:26 am
RELATED TOPICS