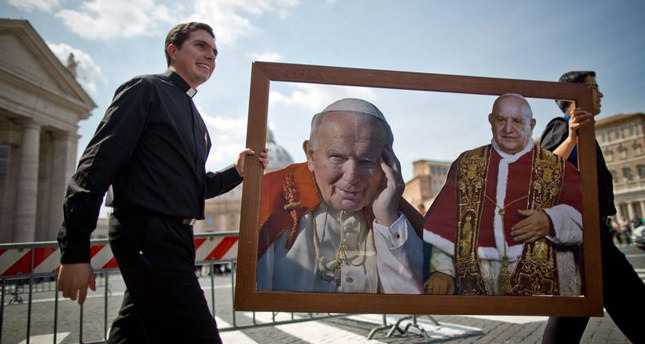 by May 07, 2014 12:00 am
GENEVA — The Vatican revealed Tuesday that over the past decade, it has defrocked 848 priests who raped or molested children and sanctioned another 2,572 with lesser penalties, providing the first ever breakdown of how it handled the more than 3,400 cases of abuse reported to the Holy See since 2004.

The Vatican's U.N. ambassador in Geneva, Archbishop Silvano Tomasi, released the figures during a second day of grilling by a U.N. committee monitoring implementation of the U.N. treaty against torture.

Tomasi insisted that the Holy See was only obliged to abide by the torture treaty inside the tiny Vatican City State, which has a population of only a few hundred people.

But significantly, he didn't dispute the committee's contention that sexual violence against children can be considered torture. Legal experts have said that classifying sexual abuse as torture could expose the Catholic Church to a new wave of lawsuits since torture cases in much of the world don't carry statutes of limitations.

Tomasi also provided statistics about how the Holy See has adjudicated sex abuse cases for the past decade. The Vatican in 2001 required bishops and religious superiors to forward all credible cases of abuse to Rome for review after determining that they were shuffling pedophile priests from diocese to diocese rather than subjecting them to church trials. Only in 2010 did the Vatican explicitly tell bishops and superiors to also report credible cases to police where local reporting laws require them to.

The Vatican statistics are notable in that they show how the peaks in numbers over the years — both of cases reported and sanctions meted out — roughly parallels the years in which abuse scandals were in the news. And they showed that far from diminishing in recent years, the number of cases reported annually to the Vatican has remained a fairly constant 400 or so since 2010, the last year the scandal erupted in public around the globe. These cases, however, concern mostly abuse that occurred decades ago.

There are over 410,000 Catholic priests around the world, according to the Catholic News Service.

The latest spike began in 2010, when 464 cases were reported, more than twice the amount in 2009. Starting in that same year, the Vatican began resorting more and more to the lesser penalty of sentencing accused priests to a lifetime of penance and prayer rather than defrocking them. The Vatican often metes out such sentences for elderly or infirm priests, since defrocking them would essentially render them destitute in their final years.