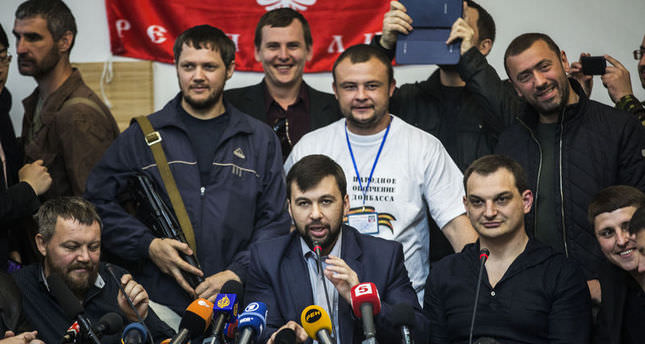 by May 08, 2014 12:00 am
DONETSK, Ukraine — Pro-Russian separatists voted unanimously on Thursday in favor of holding a referendum on independence, defying calls by Russian President Vladimir Putin to postpone the vote to open the way for talks with the Kiev authorities.

Many in Ukraine's industrial east said Sunday's referendum was the only way to prevent war, adding that without it they would lose the faith of a population fired up over what the rebels, and Moscow, call the "fascist" government in Kiev.

Russian markets sank on the news, and in Kiev, officials promised to press on with their "anti-terrorist campaign" to retake control over the regions of Donetsk and Luhansk regardless of the rebels' decision on the poll.

"We have just voted in the People's Council ... The date of the referendum was endorsed by 100 percent. The referendum will take place on May 11," rebel leader Denis Pushilin told reporters.

A man in civilian clothes holding a Kalashnikov assault rifle stood behind Pushilin as he spoke.

In a surprise announcement on Wednesday, Putin called on the rebels to postpone the vote to create conditions for dialogue between Kiev and the east, offering a possible chance to ease the worst East-West standoff since the Cold War.

Ukraine's top security official, Andriy Paruby, said earlier on Thursday that Kiev would press on a campaign to regain control of the country's east.