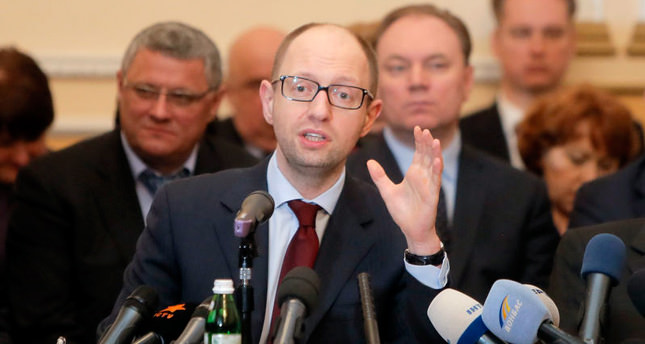 by AA May 08, 2014 12:00 am
KIEV, Ukraine — Russian President Vladimir Putin's proposal for pro-Russian separatists in eastern Ukraine to delay the planned May 11 referendums was 'intriguing,' according to Ukraine's interim prime minister.

"If Russia wants to postpone the so-called referendums on May 11, Russia's president should be informed that no referendum is planned to be held in Ukraine," Arseniy Yatsenyuk said Thursday, denying the legitimacy of a referendum which has not been called by the Ukrainian government.

He added if pro-Russian separatists took their command from Russia over the postponement of something that was not planned, then that is "their internal issue."

Putin asked pro-Russian separatists in southeastern Ukraine to delay a series of referendums planned for this weekend and the separatists said they would discuss Putin's call for postponement at an assembly meeting Thursday.

Meanwhile, Donetsk City Council demanded the Ukrainian parliament halt the military operation in the eastern regions of the country, asking the government to sit at negotiation table and find peaceful solutions for the "socio-political problems."

Ukraine's interim president, Oleksandr Turchynov, said, "civilized states would not negotiate with lawbreakers whose hands are covered with blood," dismissing remarks by Putin who has called for dialogue between Ukraine and the pro-Russian separatists.

Turchynov said the aim of the Ukrainian government was to "ensure peace, welfare and security along with stability" in the country, citing the necessity to "protect the indivisible unity of the country and get the occupied Ukrainian soil back."

He also stated that only those who voluntarily leave their arms and the occupied buildings as well as those who are not involved in crime can benefit from an amnesty which the Ukrainian government offered in April.