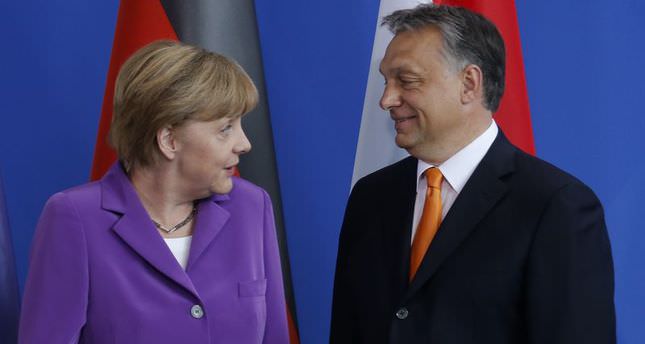 by AA May 09, 2014 12:00 am
BERLIN — German Chancellor Angela Merkel has hailed as "vital" the approaching presidential election in Ukraine, urging for a diplomatic solution to the crisis.

The chancellor said the May 25 poll should be held freely and called on Russia to do more to de-escalate tensions.

In what seemed a policy change on Ukraine, Russia's President Vladimir Putin expressed support for the election, calling dialogue between Kiev and pro-Russian separatists as "key."

Putin also urged separatists to hold off referendums scheduled for this weekend, which could help decide the fate of several eastern Ukrainian cities.

On Thursday, the eastern province of Slavyansk saw a protest where citizens including children demanded that Kiev troops end operations and pull out of the city.

Ever since the onset of a military operation against pro-Russian separatists in the country last week, a lot of businesses have closed down in Slavyansk, and public transportation has come to a halt due to the barriers set on streets. There is still a night curfew in force in the city, and difficulties with access to neighboring provinces.

The international community is concerned several Ukrainian cities in the east are in danger of separation from the central government, following the Russian annexation of the formerly autonomous Crimean peninsula.

Crimeans voted overwhelmingly in March to join Russia in a referendum seen as illegitimate by the U.S., the E.U. and Ukraine.