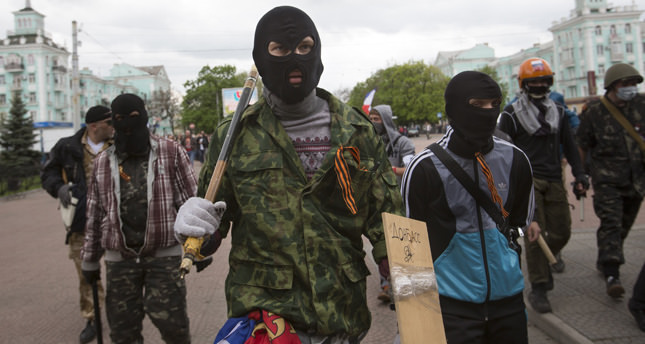 by May 09, 2014 12:00 am
DONETSK — The Ukrainian soldiers manning a checkpoint in the restive east gladly accepted the gifts of food and drink, a kind thought it seemed by local well-wishers. Twenty minutes later they had all fallen into a deep sleep, helpless to resist pro-Russian rebels who bundled them and their guns into three cars and spirited them away.

Deputy defense minister Ihor Kabanenko deplored the rebels' "dirty tactics"; but, peculiarly humiliating and unusual as it may have been, the incident gave some flavor of problems facing ill-prepared and poorly led security forces.

Weeks of fighting have exposed 20 years of neglect of Ukraine's security forces since the 1991 collapse of the Soviet Union. Eastern rebels that Kiev and the West say are backed by Russian special forces benefit from political vacillation, disarray among the generals and field commanders unsure of their orders.

While an outright invasion by Russia, which would trigger a tense NATO-Russia standoff across Europe, seems less likely for now, President Vladimir Putin leaves open the option.

"What we see now is improvisation," Dmytro Tymchuk, a former soldier and head of Kiev's Centre of Military and Political Research, told a briefing. He pointed to a failure of the many different forces, from army and paramilitary police, to special forces and air units, to communicate and cooperate efficiently.

A security source said at least two members of the SBU security service's elite Alpha unit were killed when they blundered into an ambush following a breakdown of communication.

Tymchuk cited an airfield near Kramatorsk, in the Donetsk heartland of the anti-Kiev insurrection, that came under fire, its defenders armed with only light weapons. Dispatch of air and armored support foundered on indecision.

"The staff of the ATO (Anti-Terrorist Operation) should decide these questions on the spot and react quickly...Instead they turn to Kiev and men with big stars on their lapels tell them 'wait'."

Ukraine's political leaders face a dilemma as they try to restore calm ahead of presidential elections on May 25 that they hope will bring stability.

While under pressure to act firmly and stop rebellion spreading, they must also avoid civilian casualties and actions that could play into Moscow's contention the "ATO" is nothing other than an onslaught by Ukrainian nationalist extremists.

Insurrection began in eastern, Russian-speaking areas of Ukraine after protests in Kiev forced pro-Kremlin president Viktor Yanukovich to flee to Russia. Since then rebels have seized cities across the region, mostly with little resistance.

The Interior Ministry and police forces have also been found wanting, some accused of direct collaboration with pro-Russian activists. Police chiefs throughout the country have been replaced, in the east their jobs taken by rebels.

The entire police leadership in Odessa was sacked after eastern insurgency spread for a day to the southwestern port city, raising fears of a lurch to civil war. Over 40 died in clashes, most rebel activists trapped in a blazing building.

Oleksander, 23, stands in a field near Kiev dressed in camouflage uniform, forage cap and reflective glasses, his face masked. He is a recruit to the newly formed National Guard that he sees as the vanguard of a revived Ukrainian fighting spirit.

"Discipline, will and motivation are the three components of our success," he says as shells explode over a sandy ridge across the field.

There seemed no lack of enthusiasm among recruits firing rifles and rocket-propelled grenades on the practice range surrounded by silver birch forest. Initial training for Sasha's second Kiev battalion of 270 men is three weeks.

"But considering the way things are going in Ukraine, it may be even shorter," he adds. Oleksander describes his background as that of a "social activist" and says he comes from the eastern town of Sumy 40 km (25 miles) from the Russian border.

The National Guard, founded in March, is based on the old Interior Ministry paramilitary force of 33,000, and will be augmented by some 3,000 volunteers. Some come from the "self-defense forces" involved in demonstrations early this year that eventually forced pro-Russian president Yanukovich to flee.

Oleksander laments the state of the army, which he says has been undermined by infiltration by "foreign agents" - a reference to pro-Russian loyalists - appointed to key positions especially in the intelligence services and army by Yanukovich. It is a sentiment widely shared in Kiev.

Moscow denies any subversive role or link to the rebels and blames Kiev for a crisis that has raised fears in other ex-Soviet states with Russian minorities.

Oleksander says he is determined to learn quickly. "I paid a lot of attention to self-education. I can't say I'm a professional but I also can't say I have no knowledge."

Vitaly, 52, is one of the experienced recruits to the National Guard, having, he says, served in the Soviet Army, then worked in the military field in former Yugoslavia, Iraq and Lebanon.

"I couldn't just sit at home watching all this on television, so I signed up," he says, holding up three fingers for three years. "I hope my experience can be of use here."

Lack of modern equipment and tactical training is also a serious problem. Across the border, Russian forces learnt lessons on both counts from a war with Georgia in 2008.

Mariupol, a major industrial and shipping centre in the Donetsk region that has declared a breakaway "People's Republic", seems to have become something of a testing ground, with Kiev trying a range of tactics to claw back control.

Ukrainian forces have carried out a series of probing raids, taking over checkpoints and key buildings there, before withdrawing. Gunmen melt away, then reappear, to be confronted again by soldiers in what amounts to shadow boxing.

It could continue well after a vote for autonomy called in the eastern Donetsk and Luhansk regions for Sunday.

The five soldiers seized from their Mariupol checkpoint were freed after negotiations between local police and militants. Talks between Kiev and the rebels, though, appear far away, rhetoric becomes more uncompromising and the danger grows that Ukraine's still struggling security forces will be put to the test while still in disarray.