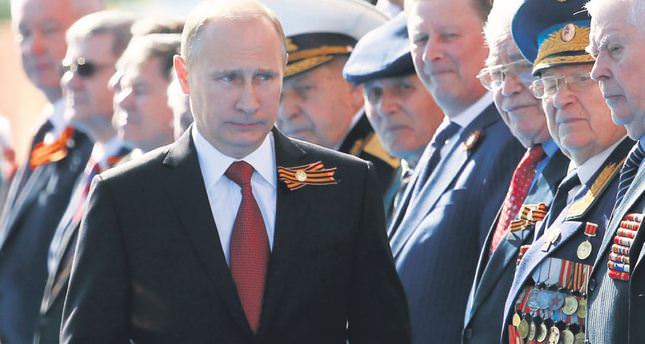 CRIMEA — Russian President Vladimir Putin went to Crimea on Friday for the first time since Russia's annexation of the peninsula in March. His move was condemned by Ukraine, sparking the ire of NATO. Ukraine's Foreign Ministry accused Russia of deliberately escalating tension while NATO Secretary General Anders Fogh Rasmussen said that Putin's
visit to Crimea was "inappropriate."

Rasmussen also said he had no visible confirmation of the withdrawal of Russian troops from Ukraine's border. Russia's Foreign Ministry had suggested that Rasmussen was "blind" after stating he had seen no signs Russia was withdrawing troops from Ukraine's border.
Putin arrived yesterday in Crimea to take part in celebrations marking the Soviet victory over Nazi Germany in World War II, the news agency Interfax reported.

He is to attend ceremonies in the port city of Sevastopol. It is the first time Putin has set foot on Crimean soil since the takeover after a March 16 referendum there. Although Putin's trip was not announced in advance, Ukrainian Prime Minister Arseniy Yatsenyuk said earlier that it would be a "provocation" if it happened.

Putin's trip coincided with fighting between government forces and pro-Russian separatists in eastern Ukraine. A gun battle reportedly erupted in Mariupol on the coast near the border with Russia. Meanwhile, Ukrainian Interior Minister Arsen Avakov said that, Ukrainian security forces have killed around 20 pro-Russian fighters during clashes in the south-eastern city of Mariupol.

One soldier has been killed, and five injured, Avakov wrote on Facebook, adding that four pro-Russian fighters were arrested. According to the minister, the clashes occured when a group of 60 "terrorists" attacked a police station in the centre of the city. Authorities in the Donetsk region, meanwhile, said three people had died and 25 were injured in the clashes. May 9 is a hallowed day for Russian patriots while Crimea, a military bastion repeatedly invaded by Russia's enemies, including the Nazis, is a potent symbol of past Russian suffering and ultimate victory.

Kiev tried to halt memorial parades around the country because of the risk they would trigger violence, two days ahead of an unofficial referendum to be held by secessionists in two eastern provinces on whether to break away from Ukraine. Ukraine authorities admitted they would be powerless to physically stop the vote.

Shots were fired in the center of Mariupol, which has a population of more than 450,000. A leader of a self-proclaimed pro- Russian self-defense group said several activists had been injured. The pro-Russian spokesman said security forces besieging a police station occupied by separatists had opened fire when the crowd arrived there. No independent verification was immediately available. City hall in eastern Ukraine's biggest city, Donetsk, admitted in an online statement that it could not stop Sunday's vote on secession although the secessionists have no access to electoral rolls in many places.

The pro-Kiev mayor's office said there were not enough police available to interrupt it. For the sake of public safety, there would be no effort to stop the separatists setting up voting stations in sites such as schools, it said. Pro-Russian activists have seized public buildings in the city and barricaded them with piles of tires and sandbags, topped with barbed wire.

Similar signs of conflict were seen in the nearby cities of Luhansk and Kramatorsk while government forces continued to surround Sloviansk, a town held by the separatists. Kiev has sent in forces in a bid to reassert its control of the restive region, but this has inflamed the pro-Russian faction. "People around here don't trust those in power in Kiev anymore," said Miroslav Rudenko, one of the leaders of the pro-Russian militants.

He said the use of troops against the militants had hardened attitudes in his camp and the poll would go ahead despite a call from Putin on Thursday to call it off. "Everything is ready for the ballot," he said. The decision means an estimated 3 million residents of the two provinces of Luhansk and Donetsk will be asked to vote on whether they want to stay part of Ukraine. Ukrainians opposed to a split see this as a first step to an eventual merger with Russia, as happened with Crimea.

Meanwhile, Crimean Tatar leader Mustafa Kırımoğlu said on Thursday Russian authorities in Crimea are forcing the population to become Russian citizens. He said those who refuse would be considered foreigners in the land, losing their civil and political rights and being required to obtain a residence permit to stay in the peninsula.

On March 21, Russian President Vladimir Putin signed into law the annexation of Crimea following a referendum. Kırımoğlu said Crimean Tatars would continue their struggle against what they consider to be "invaders" - Russian forces in the peninsula. "We do not approve of the use of arms and spilling blood and the Crimean citizens will continue their movement for independence through democratic ways," he said. Around 97 percent of voters chose to secede from Ukraine and join Russia in the March 16 referendum. The United States, the European Union and Ukraine regard the vote as illegitimate.