UN to urge Syria on allowing aid flow through Turkey 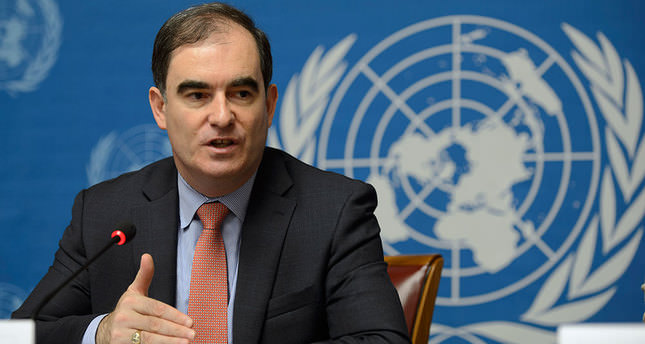 by AA May 10, 2014 12:00 am
GENEVA — The UN said Turkey's Nusaybin border gate into Syria was a vital corridor to deliver humanitarian aid to Syrian people, but the Syrian government should allow two other border gates to be used to reach more people.

"We have identified 262 locations that we are not able to get in where approximately 3.5 million Syrian people live," John Ging, a senior official from the UN humanitarian affairs agency, told a press conference in Geneva on Friday.

He said the agency was "pressing very hard" for having Syrian government allow the use of two other border crossing points from Turkey.

The UN requested from Turkey on March 6 to allow the passage of a cross-border humanitarian convoy into Syria through the Nusaybin/Kamışlı border gate. Turkey responded positively to the request.

"There are 3.5 million people in the hard-to-reach areas who are effectively inaccesible to aid efforts and 240,000 people are in beseiged areas. They are truely abandoned," Ging said.

He stressed that the negative impact of the ongoing civil war on surrounding countries were getting worse and neigbouring countries should be financially supported.

"How many more should be killed before you take effective action?" Ging asked the international community.

Syria has remained in the throes of conflict since early 2011 when a peaceful uprising against President Bashar al-Assad escalated into full-fledged civil war following a violent government crackdown.

According to the U.K.-based Syrian Observatory for Human Rights, more than 150,000 people have been killed since the conflict began more than three years ago.