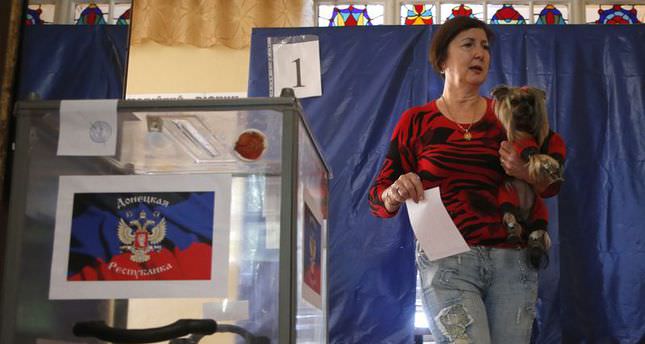 by May 11, 2014 12:00 am
DONETSK, Ukraine — Residents of two restive regions in eastern Ukraine engulfed by a pro-Russia insurgency cast ballots Sunday in contentious and hastily organized independence referendums.

The ballots seek approval for declaring so-called sovereign people's republics in the Donetsk and Luhansk regions, where rebels have seized government buildings and clashed with police and Ukrainian troops over the past month.

Ukraine's authorities and the West have rejected the referendums as illegal. Ukraine's interim president has said that independence for eastern regions will destroy the country's economy.

"This is a step into the abyss for the regions," Oleksandr Turchynov said in comments posted on the presidential website Saturday.

Polling stations opened at 8 a.m. (0500 GMT) and were due to close at 10 p.m. (1900 GMT). Referendum organizers said they expected a high turnout, even though the security situation remained unstable around much of the area where the vote was held.

Insurgents in the city of Slaviansk, which has seen some of the most violent fighting between pro-Russia militants and government forces in recent weeks, exchanged fire with Ukrainian troops on the outskirts of the city overnight. And the port city of Mariupol on the Sea of Azov has remained on edge after Friday's clashes, in which at least seven died.

Ukraine and the West have accused Russia of fomenting or even directing the unrest in the east, with the goal of destabilizing Ukraine or finding a pretext for invasion. Russia has rejected the accusations.

Russia's President Vladimir Putin had asked the referendums' organizers to delay the vote as he bargained with Western powers on conditions for defusing the worst crisis in relations between Russia and the West since the Cold War. The insurgents, however, have refused to heed his call.

The hastily arranged ballots are similar to the March referendum in Crimea that approved secession from Ukraine. Crimea was formally annexed by Russia days later.

'Referendum would be a complete destruction of the economy'

Ukraine's interim president said supporters of independence for the east "don't understand that this would be a complete destruction of the economy, social programs and general life for the majority of the population."

Turchynov and Ukraine's caretaker government came to power in February following the ouster of Russia-friendly president Viktor Yanukovych after months of protests in Kiev. Moscow and many in Ukraine's east denounce the new government as a nationalist junta and allege that it intends to trample on the rights of eastern Ukraine's Russian-speakers.

More than 30 people have been reported killed since Ukrainian forces began mounting offensives to retake some eastern cities now under control of the insurgents.