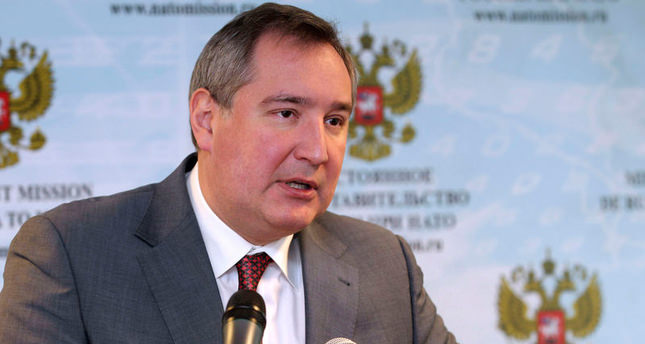 by May 11, 2014 12:00 am
BUCHAREST — Romania asked Moscow for an explanation on Saturday after Russia's Deputy Prime Minister Dmitri Rogozin, reacting to being barred from its airspace, tweeted he would return in a TU-160 strategic bomber.

Rogozin, one of the senior Russian officials sanctioned by the European Union and United States after Moscow moved to annex Crimea, was turned away when his plane tried to fly to Moscow from Moldova's breakaway Transdniestria region.

According to his tweets in English, Rogozin, who oversees Russia's powerful arms industry, was also blocked by Ukrainian interceptor jets as he tried to fly home from the Russian-speaking region of Moldava bordering Ukraine.

"Upon U.S. request, Romania has closed its air space for my plane," he tweeted. "Ukraine doesn't allow me to pass through again. Next time I'll fly on board TU-160." The supersonic Soviet-era TU-160 is Russia's largest strategic bomber.

The Romanian foreign ministry asked Moscow to clarify whether Rogozin's comments represented "the Russian Federation's official position towards Romania as an EU and NATO member".

It said it "believes the threat of using a Russian strategic bomber plane by a Russian deputy prime minister is a very grave statement under the current regional context."

It added that "the Russian Federation has broken Ukraine's territorial sovereignty ... while pro-Russian separatists are violating public order in the neighboring state."

The statement said Romania was abiding by the sanctions imposed by the European Union against Russia. Rogozin, an avid user of social media, posted on his Facebook page the Romanian message to him citing the relevant European Council decisions.

Travel bans are among the limited sanctions Western states have imposed on some Russian and pro-Moscow Ukrainian political and business leaders, including Rogozin.

Rogozin was on a visit to Russian-speaking Transdniestria, a long narrow strip of Moldova bordering Ukraine that broke away from the rest of the Romanian-speaking country in 1990 as the Soviet Union was beginning to collapse.

Moldova, one of Europe's poorest countries and Romania's eastern neighbor, is seeking closer ties with the EU, which last month said Moldovans would no longer need visas to travel to most of the bloc.

In another tweet sent one hour before he was turned away, Rogozin said: "this morning I met with the Command of the Joint Staff of Russian Forces in Transdniestria."

In other tweets, Rogozin said he attended celebrations on Friday in Tiraspol, capital of Transdniestria, to mark the anniversary of the 1945 Soviet victory over Nazi Germany.