Russian separatists go ahead with referendum 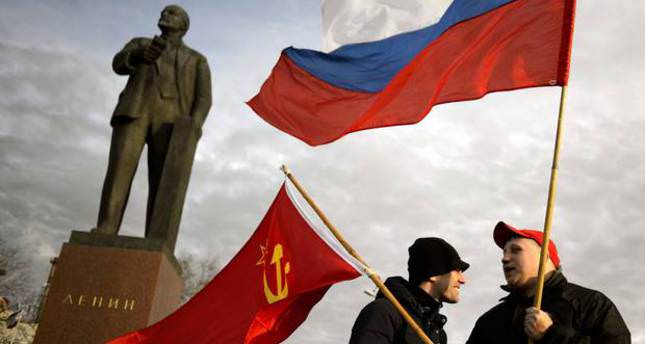 DONETSK — Pro-russian separatists in Donetsk and Luhansk yesterday held contentious referendums on declaring independence from Kiev in defiance of growing condemnation from the Ukrainian government and international community. Russian President Vladimir Putin's call to postpone the referendums was not enough to deter pro-Russian rebels from holding them. Polling stations opened at about 6 a.m. GMT.

According to some reports, pro-Russian separatists claimed that voter turnout in the independence referendum was "overwhelming" while refuting claims by pro-Ukrainian media over a low voter turnout. There has been no detailed information reported regarding the electoral registration or the number of employees in charge of electoral procedures.

Around the city of Donetsk, people queuing at polling stations voted for or against the establishment of the self-declared People's Republic of Donetsk. In neighboring Luhansk, it is expected that voter turnout will be about 22 percent.

While the brutal clashes between the Kiev government and pro-Russian militant groups has continued to affect the daily life of many residents across the eastern part of Ukraine, pro-Russian groups have declared that a second round of voting would possibly be held on May 18 in order to decide whether the newly established federation would join Russia or remain part of Ukraine.

Considering the possible effects of the independence referendum for the future of Ukraine's national unity, the referendum signals that holding a presidential election within two weeks under a heavy atmosphere of brutal clashes would compound the overall political situation in Ukraine. Eşref Yalınkılıçlı, a Eurasia analyst, spoke to Daily Sabah and stated that regarding the volatile situation in the region, the referendum would prove to cause further separatist action in the eastern region and lead to more referendums in the future.

Taking all the recent developments into account, the Kiev government would require more help from its Western counterparts. U.S. State Department spokesperson Jen Psaki stated in a daily press briefing on May 9 that the U.S. government has helped the Ukrainian government with "a range of economic assistance, technical assistance, assistance in terms of experts" and provided "a total of $11.4 million to support free and fair elections." "The referendums are illegal under Ukrainian law.

Our view is that they're an attempt to create further division and disorder in the country," said Psaki, demonstrating that the U.S. government has given its full support for the permanence of Ukraine's national unity regarding the upcoming election as the main target.
Apart from the U.S. government's condemnation of the referendum, the international community voiced concern over the illegality of the referendum, stating that the vote violated Ukrainian law. European countries and the United States have focused on the presidential election, which has long been considered the only way to ensure Ukraine's territorial integrity.

French President Francois Hollande and German Chancellor Angela Merkel on Saturday declared that unless Ukraine's presidential election will take place on the expected date, Russia would conceivably face further sanctions. They also called on both Kiev and Moscow to halt reciprocal military action which might damage the overall process of the election. The two leaders announced that France and Germany would start the disarming of rebel forces by May 15 with the supervision of the Organization for Security and Cooperation in Europe (OECD). Both the EU and the United States have long been trying to build a strong alliance against Russia's policies over Ukraine while stepping up their sanctions.

The self-vote referendum shows that the regions of Donetsk and Luhansk, home to 6.5 million people with a high proportion of Russian speakers, have long suffered from a lack of representation under the Ukrainian government. The pro-Russian insurgency in eastern Ukraine has resulted in deadly clashes leaving many people killed and injured. As Ukrainian military operations in the eastern region continue to quell weeks of unrest, the presidential election which Ukraine is to hold in two weeks is expected to determine the country's future.