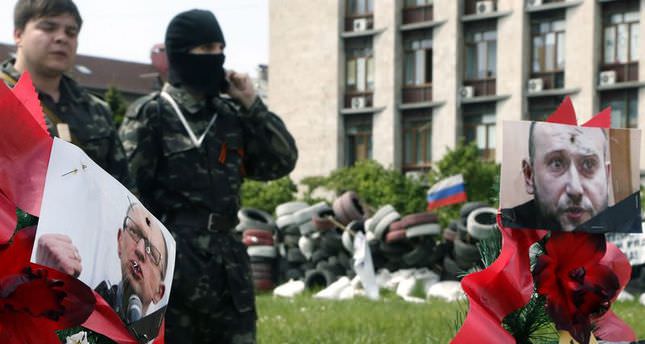 by Anadolu Agency May 15, 2014 12:00 am
DONETSK, Ukraine — Pro-Russian separatists in Ukraine eastern region of Donetsk gave Ukrainian forces an ultimatum Thursday to leave the region within 24 hours or face attacks.

In a statement, a group called the Donetsk Defense Forces, warned Ukrainian soldiers to remove check points and roadblocks.
The statement added that they had the capabilities to push the Ukrainian forces out of Donetsk.

Meanwhile Ukraine's Interim President Oleksandr Turchynov told Ukraine's parliament on Thursday that Ukrainian forces had destroyed the defense bases of separatists in Kramatorsk, in the region of Donetsk.

Elsewhere, Russian news agency "Ria Novosti" is reporting that the authorities of the self-proclaimed Donetsk People's Republic have reiterated that the upcoming presidential election of "neighboring state" Ukraine will not be held in its territory.

The region of Donetsk has declared its independence from Ukraine after holding a "self-rule" referendum instigated by pro-Russian separatists. However, the Ukrainian government and Western nations have refused to recognize this newly declared federation.