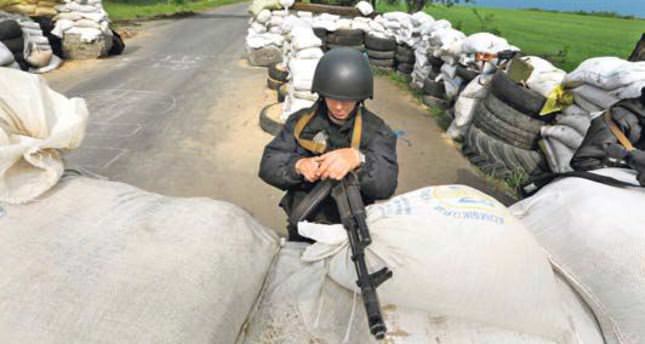 A day after the Ukrainian soldiers were killed in the east of the country, Ukrainian leaders launched "national unity" talks in Kiev as part of a Western push to defuse the crisis from gripping the country

UKRAINE — Separatists in eastern Ukraine said yesterday they killed eight government soldiers in a night-time battle outside their stronghold in Sloviansk. "The enemy launched a fresh attack around 1 a.m. but we fought back," the city's self-proclaimed mayor Vyacheslav Ponomaryov told Russia's Interfax news agency.

Ponomaryov said his men killed eight soldiers and destroyed a number of armored vehicles. He added that the separatists also suffered losses, but failed to give further details. The Ukrainian government did not immediately comment on Ponomaryov's claims.
On Tuesday, seven people - including six members of the security forces - were killed in clashes south west of Sloviansk. The Defense Ministry in Kiev said rebels had ambushed a group of paratroopers.

Meanwhile, Russia declared on Wednesday that Ukraine was on the edge of civil war just as Kiev's leaders were to host Westernsponsored "national unity" talks to try to save the country from falling apart. The Ukrainian government had agreed to host roundtable talks in an attempt to defuse the conflict, which talks took place in the capital Kiev. The discussions - which crucially do not involve the pro-Moscow rebels waging an armed insurgency in the east - come barely two weeks before Ukraine holds a presidential election that the West is scrambling to keep alive. "When Ukrainians kill Ukrainians I believe this is as close to a civil war as you can get," Russian Foreign Minister Sergei Lavrov said in an interview with Bloomberg television. "In east and south of Ukraine there is a war, a real war."

Tensions remained high in the east after rebels killed seven Ukrainian soldiers in an ambush Tuesday, the deadliest single loss of life for the military since it launched an offensive against the separatists in April. The latest bloodshed underscores the urgency of the new Western effort to resolve the escalating crisis on Europe's doorstep after the failure of a deal hammered out in Geneva last month.
There was also a stark warning from the European Bank for Reconstruction and Development about the wider fallout from the deep economic gloom in both Ukraine and Russia.

European leaders have called for Wednesday's talks, being held under a roadmap drafted by the pan-European security body the OSCE, to be as inclusive as possible. The meeting brings together government officials including Prime Minister Arseniy Yatsenyuk as well as lawmakers, former leaders and presidential candidates.

But rebels who have overrun more than a dozen towns in the east and proclaimed "sovereignty" in the industrial regions of Donetsk and Lugansk after hotly disputed weekend referendums are not invited. EU leaders ramped up the pressure on Russia with new sanctions Monday, and warned of further "far-reaching" punitive measures if the election fails.

The roadmap calls for "restraint from violence, disarmament, national dialogue, and elections". But while voicing support for the plan, Russia has accused Ukraine's authorities of refusing "real dialogue" with the separatists. It says Kiev must halt its military operation if rebels are to comply with the peace initiative, and insists on negotiations over regional rights before the presidential vote. Russia has however rolled back its vehement opposition to the election, called by Kiev's new leaders after the ouster of pro-Kremlin president Viktor Yanukovych in February, the climax of months of sometimes deadly pro-EU protests.

Fears for Ukraine's very future have been heightened following the independence votes in the eastern industrial regions, home to 7 million of the country's 46 million people. The referendums were rejected as illegal and a farce by Kiev and the West, fearful that President Vladimir Putin would move quickly to annex the territories as he did with Crimea in March. Putin said last week that Russia had withdrawn its estimated 40,000 troops from the border, but the West says it has seen no sign of a major pullback.

Poland's Prime Minister Donald Tusk pressed for urgent NATO and EU action, warning there was a "real risk or threat that the Ukrainian state could fall, or at least be subject to a very painful split." Violence has raged for weeks in eastern Ukraine as government troops carry out what Kiev describes as "anti-terrorist" operations against well-armed rebels. Dozens have been killed in fighting in the east and in an inferno in the southern port city of Odessa. The Kremlin said Kiev had to immediately stop "reprisal raids" - using a term that refers to a World War II-era Nazi massacre. But interim President Oleksandr Turchynov insisted the offensive would go on.
Last Update: May 15, 2014 1:57 am
RELATED TOPICS