Tweeting praise of politician's murder gets man indicted in Spain 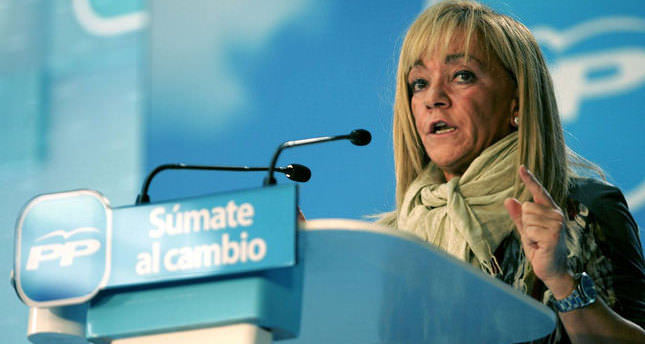 by May 16, 2014 12:00 am
MADRID — A Spanish court indicted a 19-year-old man on Friday for allegedly glorifying the murder of a ruling party politician on Twitter, authorities said. Magistrates in the eastern city of Valencia opened proceedings against the young man for comments about the killing of Isabel Carrasco, a provincial council leader shot dead on Monday, a regional court official said.

Spanish media published some of the Tweets posted by the suspect in Valencia, with messages such as "That's the way to do it. Kill them all!" and "Isabel CarrasKO". He is suspected of "defending the crime of murder and publishing messages on a social network expressing his support for the murder", police said in a statement.

Police also questioned another suspect in the southern city of Jerez de la Frontera who was due to go before a judge for posting online a video with a song celebrating the killing, a spokesman for the force said. Carrasco, 59, was gunned down in broad daylight in the northern city of Leon on Monday. Sources close to the investigation said a 55-year-old woman had admitted killing Carrasco as an act of personal vengeance after her daughter was laid off by the council.

The 35-year-old daughter was arrested along with her mother shortly after the killing. A judge on Friday also remanded in custody a third suspect in the case, a court official said. That suspect is reportedly a policewoman suspected of handling the gun used in the killing.
Carrasco was the leader of the provincial council in the northern city of Leon for the governing Popular Party.

The killing shocked the Spanish political world and drew messages of condolence from numerous parties, including Carrasco's rivals. But it also sparked many insults online, particularly on messaging platform Twitter, against conservative politicians by Spaniards angry over years of corruption scandals.

That prompted Interior Minister Jorge Fernandez Diaz to launch a crackdown on "defence of crime or incitement to hatred" on the web. A left-wing opposition lawmaker, Gaspar Llamazares, denounced the move as an attack on freedom of expression and warned of a "witch hunt" on social media.
Last Update: May 16, 2014 9:13 pm
RELATED TOPICS