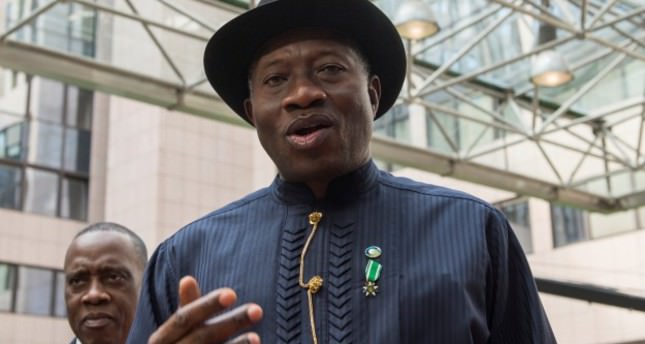 by AA May 17, 2014 12:00 am
LAGOS — Nigerian President Goodluck Jonathan has cancelled a planned visit to Chibok, the northeastern town from which Boko Haram militants abducted scores of schoolgirls in mid-April.

"The advanced team feels the coast is not clear for the president, and so the visit is put on hold for now," a military source told AA.

On April 14, Boko Haram militants stormed a school in Chibok, located on the fringes of Borno State's Sambisa Forest, loading scores of schoolgirls onto trucks before driving away unchallenged.

Jonathan has not visited the town since the abductions, drawing the ire of the Nigerian public who accuse him of "insensitivity".
None of the Nigerian president's aides has confirmed that the visit had been cancelled.

Reports about the cancelled visit have elicited intense criticism of the Nigerian president, especially on social media.
"President Jonathan doesn't care enough to make a trip to Maiduguri and Chibok. I am therefore not surprised he cancelled the grossly belated trip," Luaretta Imo wrote on his Twitter account.

Nigeria's top newspaper man, Simon Kolawole, derisively joked about the cancelled visit: "If Jonathan will go to Chibok, then Chibok should come to Jonathan."