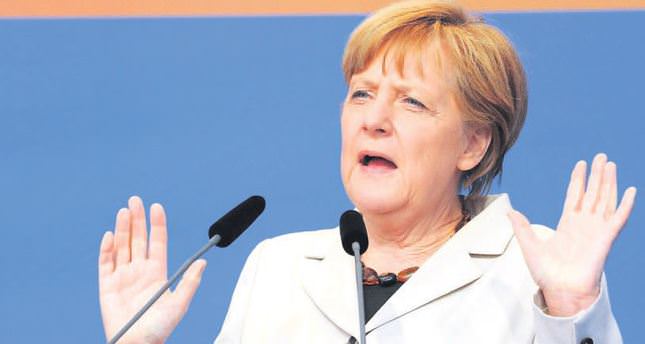 BERLIN — As Germany has close economic ties with Russia, German businessmen are anxious about imposing tougher sanctions on Russia, fearing it could come back to harm them. Although German companies have toned down their public criticism of sanctions since the CEO of Siemens was vilified in the press for meeting Russian President Vladimir Putin in late March, a behind-the-scenes lobby effort remains in full force. A confidential paper from the German-Russian chamber of foreign trade, which was sent to the government last week, shows the extent of the concern in German business circles as a May 25th presidential election in Ukraine nears. Merkel said she will press for more punitive measures against Russia if the election is disrupted.

The two-page position paper, dated May 7th, says the Ukraine crisis is already having a "massive impact" on German business in Russia and warns of dire consequences if Europe follows through on threats of economic sanctions. "Deeper economic sanctions would lead to a situation where contracts would increasingly be given to domestic firms, projects would be suspended or delayed by the Russian side, and Russian industry and politicians would turn to Asia, in particular China," the paper says. The resulting loss of market share for German and European firms would be "long-term and sustainable", causing "irreparable damage" to Germany's competitive position, according to the paper. Moreover, sanctions would lead to job losses in Germany and expose companies to "massive compensation" claims if they were forced to break contracts with their Russian counterparts, it says.

The chamber represents over 800 companies, providing support to German firms operating in Russia and Russian companies present in Germany. Rainer Seele, the chief executive of Wintershall, the oil and gas unit of German chemicals company BASF, serves as president of the group.

Over 6,000 German firms are active in Russia. And Germany receives roughly a third of its oil and gas from Russia. Recent data showed German exports to Russia - its 11th biggest trading partner - slumping 16 percent in the first two months of the year. That was before the EU unveiled a first round of mild sanctions in the form of visa bans and asset freezes against Russians individuals, many close to Putin. The economic risks have not prevented Merkel from warning repeatedly that she is ready to introduce deeper-cutting trade sanctions, a stance that has opened her up to criticism from former German chancellors Gerhard Schroeder and Helmut Schmidt, Social Democrats (SPD) who reject confrontation with Russia. German industry, on the other hand, has gone quiet since Siemens CEO Joe Kaeser met with Putin and referred to the Ukraine crisis as "short-term turbulence" which would not get in the way of his firm's ties with Russia. Last week Kaeser said he regretted his choice of words. Out of public view however, lobbyists for German industry continue to warn loudly against steps that might lead to a full-blown economic confrontation with Russia in the hope that Merkel could waver. The "Ost Ausschuss", or Committee on Eastern European Economic Relations, has been at the forefront of these efforts. Its message to German politicians has been that a confrontation with Russia would hit not only Germany, but southern European countries.

The suggestion is that Europe itself would be plunged back into deep economic and social turmoil. In a sign that German industry remains determined to keep Russia close, the CEOs of big utility E.ON and retailer Metro, as well as Klaus Mangold, the chairman of tourism group TUI - and former head of the Ost Ausschuss - are all planning to attend an economic conference in St. Petersburg next week that will be hosted by Putin.

One of the biggest concerns among German businesses is that U.S. firms will end up being the big beneficiaries of an economic confrontation between the West and Russia.

Heino Wiese, a former SPD politician, pointed to news this week that U.S. Vice President Joe Biden's son is joining the board of a Ukrainian gas company as evidence the U.S. is already seeking to gain from the crisis. "At the end of the day, the U.S. wants to be the one that sells gas to Europe," he said.