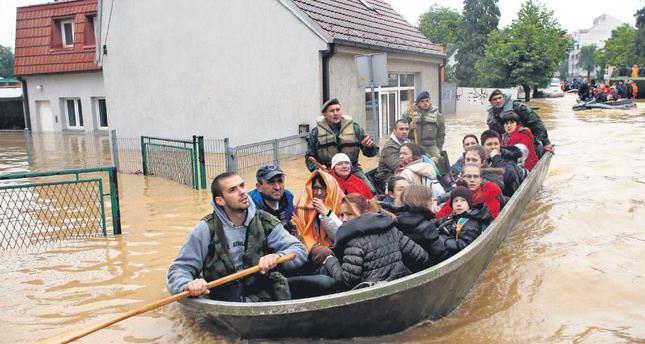 by Raide Oral May 19, 2014 12:00 am
ISTANBUL — Development Agency, Turkish Red Crescent and various local NGOs is beginning to reach Bosnia and Serbia, where at least 25 people have died in the worst floods in a century. Floods led to massive evacuations in Serbia and Bosnia, while more than two dozen people are feared dead.

Rapidly rising rivers caused by heavy rainfall on May 14 forced thousands of people to evacuate their flooded houses. Authorities said that the towns of Doboj in northern Bosnia and Obrenovac in Serbia were the worst affected areas.

According to some reports, at least 20 people were killed in Doboj. In Obrenovac, five people were confirmed dead. While thousands of volunteers joined soldiers, police and fire fighters to help the victims, Turkey also sent aid to flood-hit areas.

The Turkish Red Crescent is closely following the current situation in Bosna and Herzegovina. A group of officials will visit the region to meet with local authorities for upcoming aid packs. The officials will also take part in the distribution process. Ali Akgül, director of Turkish Red Crescent National Disaster Management, confirms that the Red Crescent remains in touch with the Red Cross and that an aid convoy was sent to Bosnia and Herzegovina. In his statement to the Daily Sabah he indicated that there is no official information about the number of deaths and casualties, yet the flood caused extensive property damage. The Red Crescent currently has two aid convoys ready to send Bosnia and Serbia.

Speaking to the Daily Sabah, IHH Humanitarian Relief Foundation Balkan Desk official Yusuf Korkmaz stated that humanitarian aid has been continuing since the first day of the disaster. The IHH sent a number of aid packs, including food, blankets and water. Korkmaz pointed out that aid packs were initially sent to Zenica and Doboj, the most affected cities. According to sources, 30 people died in Doboj. Korkmaz said heavy flooding submerged hundreds of houses and roads, adding that disaster victims went to military shelters or their relatives whose houses were intact.

The Turkish Cooperation and Coordination Agency sent a second aid convoy to Bosnia and Herzegovina. It was reported that the agency previously sent aid to the town of Maglaj in the Zenica-Doboj canton. The aid packs composed of 32,000 cans of tinned food, water, fuel and nappies.

Meanwhile, two Russian cargo planes and rescue teams from around Europe also joined volunteer aid efforts in Serbia and Bosnia.
It was reported that the heavy rains caused around 300 landslides in Bosnia, burying houses and cars. River levels were still rising in Belgrade and west towards the Bosnian border and were threatening power stations. Officials said that tens of thousands of homes in Serbia and around 150,000 in Bosnia were without electricity. According to authorities, the economic impact of the floods will be huge.