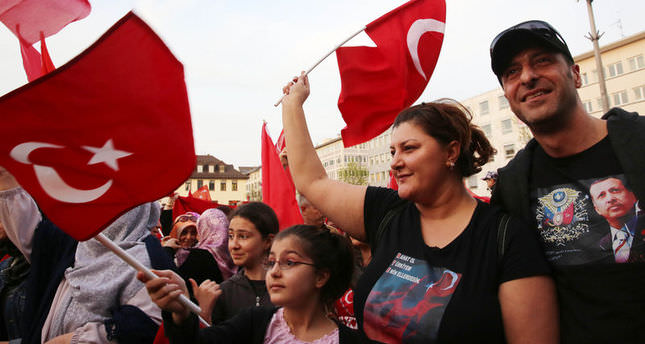 by May 20, 2014 12:00 am
BERLIN — Germany has rejected calls for Turkey's Prime Minister Tayyip Erdoğan to cancel his visit to Cologne on Saturday. He is due to address almost 20,000 supporters in what could amount to rally for Turkey's presidential poll in August.

Erdoğan has not yet said whether he will run for the Turkish president, but he is widely expected to do so.

Although his party says the Cologne speech is not a campaign event, some German lawmakers have urged Berlin to discourage it.
German government spokesman Steffen Seibert said the visit was a private one and the Turkish premier was welcome. He added: "The government expects Prime Minister Erdoğan to approach this appearance with responsibility and sensitivity."

Foreign Minister Frank-Walter Steinmeier said he expected the speech to be "appropriate to international customs and above all fitting to the close nature of German-Turkish ties".

An estimated 2 million Turkish citizens living in Germany have a right to vote in Turkish elections, and Erdoğan would want their support if he stands. Another 1 million people of Turkish origin have become German citizens.

"In theory, we are a country which is open to visitors," said Peter Tauber, the secretary general of the Christian Democrats, Chancellor Angela Merkel's party. "Everyone can speak here and we have freedom of speech and freedom to gather."