Turkey continues to send aid to flood-hit Bosnia and Herzegovina 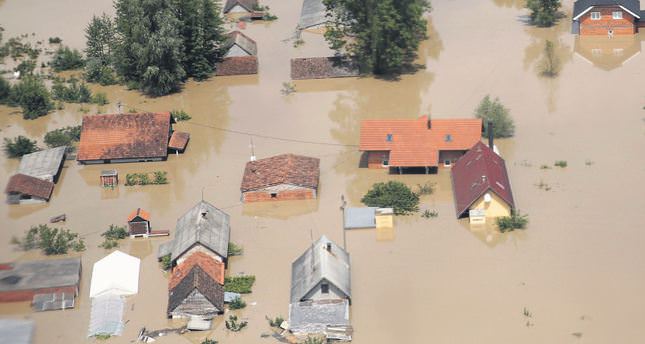 As Bosnia and Herzegovina continue to struggle after the worst floods in a century, Turkey plans to step up its aid to the country with Turkish officials sending a team of experts yesterday

BOSNIA — The death toll from the floods in Bosnia and Serbia continues to increase while rising waters have forced thousands of people to flee their homes.

In Bosnia, the situation in cities such as Maglaj, Orasje, Zenica, Bosanski Samac and Doboj has become critical with reports that over 25 people have died in Bosnia while the death toll in Serbia has risen to 37. More than 25,000 endangered persons have been evacuated throughout Serbia. Tens of thousands of Bosnians have also been forced to leave their homes.

Organized volunteers are arriving to the critical areas, offering help in evacuation, delivering food and other essentials. Emergency workers from the Civil Protection and the Red Cross / Red Crescent are doing their best in gathering needed aid.

Residents in both countries have started actions through Facebook, Twitter and other social services including tennis legend Novak Djokovic who has been tweeting updates and asking for support for both Serbia and Bosnia.

French football player Thierry Henry also got in on of the act, posting on his Twitter account "My thoughts go out to all those suffering with the floods in Bosnia and Serbia."

Countries such as Slovenia, Austria, Germany, Russia, the U.K. and Turkey have launched massive donations, and offered manpower, helicopters and boats.

The Disaster and Emergency Management Presidency of Turkey (AFAD) personnel have arrived to Bosnia to help and coordinate on clearing up the mess left by the catastrophic floods.

Also, Turkish officials arrived this morning to Sarajevo International Airport, delivering 125,000 bags of sand and 1,000 blankets as well as equipment for cleaning.

The ambassador of the Republic of Turkey in Bosnia and Herzegovina, H.E. Ahmet Yıldız said that the aid provided will be transported with the vehicles of the Turkish troops within EUFOR.

Foreign Minister Ahmet Davutoğlu sent a message that Turkey is sending all the help possible to Bosnia.

In a telephone conversation, the Bosniak member of the Presidency of Bosnia and Herzegovina, Bakir Izetbegovic, informed Mr.Davutoğlu of the essentials Bosnian citizens require.

The president of the World Bosniak Congress and the former grand mufti Mustafa Ceric arrived yesterday, visiting the flooded areas in Zepce and Zenica.

Turkey has also sent a team of experts to identify the needs of the people and coordinate relief aid in flood-hit Bosnia.

Although weather conditions in Bosnia and Serbia have stabilized, new dangers have emerged such as landslides, water contamination and the spreading of disease.

Perhaps of more alarming concern is the threat of land mines after the floods washed away minefield warning signs.
Last Update: May 20, 2014 2:01 am
RELATED TOPICS