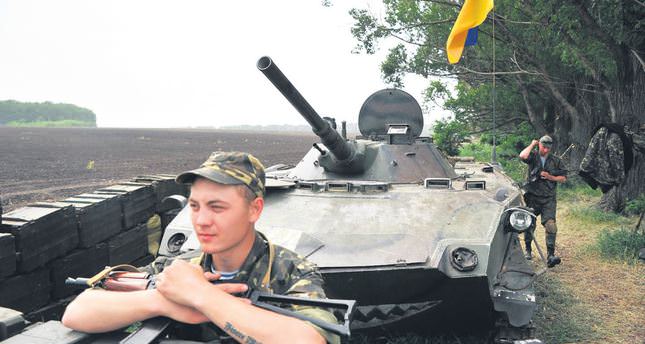 Russia has withdrawn all its forces to at least 10 kilometers from the frontier with Ukraine, a top Ukrainian border guard official said yesterday

MOSCOW — Russian troops are dismantling their camps near the border with Ukraine, the Russian Defense Ministry said yesterday. The news comes one day after Russian President Vladimir Putin issued an order that stipulated soldiers in border regions should return to their home bases. The troop withdrawal will happen incrementally, the ministry is quoted as saying by Russia's Interfax news agency.

A top Ukrainian border guard official said also said that, Russia has withdrawn all its forces at least 10 kilometers from the border with Ukraine. "As far as the presence of [Russian] forces within 10 kilometers of our border, they are not there anymore," Ukrainian news agencies quoted border guard service official Sergiy Astakhov as saying, adding that troops had previously been stationed within a few hundred meters of the ex-Soviet state.

NATO however, said Monday that it saw no evidence of Russian troops pulling back from the border with Ukraine, despite such an order by Russian President Vladimir Putin. NATO Secretary-General Anders Fogh Rasmussen said, "Unfortunately...we haven't seen any evidence at all that the Russians have started a withdrawal of troops from the Ukrainian borders." The U.S. also said it had seen no evidence of troop movement. State Department spokeswoman Jen Psaki said Russia made a similar announcement last week "and we didn't see any evidence of movement at that time."

The Kremlin responded that Putin had ordered all troops stationed along the border with Ukraine to withdraw and noted that spring training had been completed in the Rostov, Belgorod and Bryansk regions and that units would return to their barracks. Ukraine and the West have claimed that Russia has been massing tens of thousands of soldiers along the border, raising fears of an invasion in Kiev and prompting accusations from the West that the troops would further destabilize Ukraine as its pro-Western government faces unrest from pro-Russian separatists.

Russia has justified the presence of the troops as part of maintaining Russia's and the Russian people's own security. The Kremlin statement was issued as Ukraine heads into presidential elections at the weekend. German Chancellor Angela Merkel spoke with Putin by phone and urged him to respect the outcome of the election, a government spokesman said in Berlin. The Kremlin said that the two leaders expressed hope that the authorities in Kiev would continue with the dialogue process in keeping with the roadmap outline by the Organization for Security and Cooperation in Europe.

Psaki said the Ukrainian government's preparations for the presidential election on May 25th were proceeding well. "There are parts of eastern Ukraine, including parts of Crimea, where there are challenges, but most of Ukraine is calm and prepared to vote," she said.
Nationwide, 93 percent of district election commissions are functioning normally, and they're on track to conduct the election, she said.

Meanwhile, up to 10,000 people are estimated to have fled their homes in Ukraine, the U.N. refugee agency, UNHCR said yesterday. Even before the March referendum in Crimea, displacement in Ukraine had started and has been rising gradually since then, UNHCR spokesman Adrian Edwards said in a press conference on Tuesday at U.N. headquarters in Geneva. "We are seeing a continuing steady rise in internal displacement in Ukraine, which is now estimated to be affecting some 10,000 people in the country," UNHCR spokesman Adrian Edwards said in the press conference on Tuesday in the U.N. headquarters at Geneva.

UNHCR noted "U.N. agencies provided legal assistance, integration grants for 150 families, cash assistance for 2,000 people, and shelters for 50 families." "Most of those displaced are ethnic Tatars," Edwards said. "At least a third of the these displaced are children," he added.
Most of the IDP families inside the country are moving to central and western Ukraine, UNHCR noted.
RELATED TOPICS