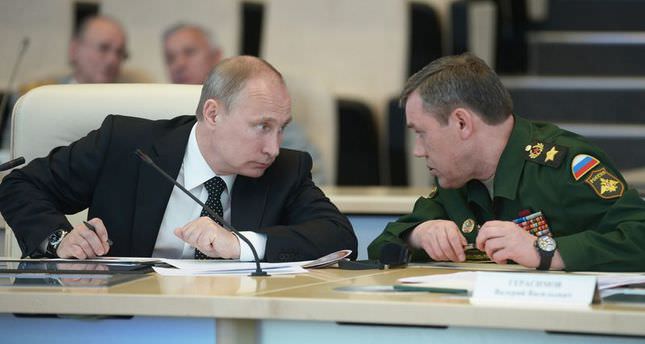 by May 23, 2014 12:00 am
MOSCOW — Russia's top general said on Friday that Moscow would retaliate against increased NATO activity near its border as tensions with the western alliance over Ukraine escalate.


Since Russia annexed Ukraine's Crimea region, NATO has moved to reassure its nervous eastern European allies. Ships and planes have been temporarily deployed to their countries and military exercises in the region stepped up.

"NATO's military groupings in the Baltic states, Poland and Romania are being built up, as well as the military presence of the bloc in the Baltic, Mediterranean and Black Sea," General Valery Gerasimov, the chief of general staff of the Russian armed forces, told a defense conference in Moscow.

"The intensity, the operational and combat readiness of the alliance's troops is being increased near the Russian border. In these circumstances ... we have to take retaliatory measures."

Russia has long been wary of the expansion of the military bloc of 28 nations into eastern Europe, with President Vladimir Putin saying last month that his annexation of Crimea was partly influenced by NATO enlargement.

The crisis in Ukraine - which holds a presidential election on Sunday seen as crucial for its fragile democracy - has left ties between Russia and the Western alliance at their lowest ebb since the Cold War.

NATO last month suspended all practical cooperation with Russia to protest its absorption of Crimea.

But despite tension over Ukraine, NATO Secretary-General Anders Fogh Rasmussen said earlier this month that the bloc does not expect to base large numbers of new combat troops in eastern Europe.