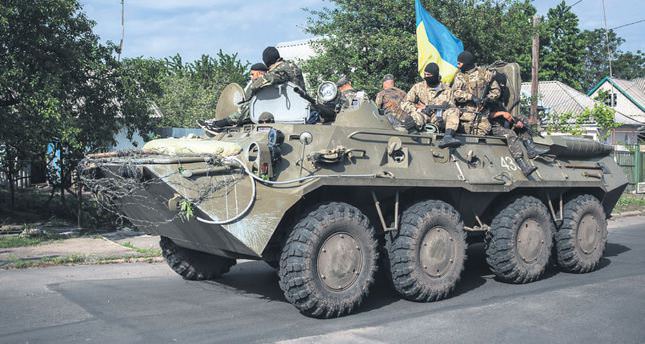 DONETSK — At least seven people were killed in fighting between rebels and defense forces outside the eastern industrial hub of Donetsk on Friday, a day after the deaths of 18 soldiers in the heaviest loss for the Ukraine military since the conflict began.

Interim President Oleksandr Turchynov called on voters to turn out in force Sunday to prevent Ukraine "being turned into a part of a post-Soviet empire" by a weeks-long insurgency that Kiev and the West say is being orchestrated by Russia. And Putin said he would "respect the choice of Ukrainian people". "We are today working with those people who control the government and after the election we will of course work with the newly elected authorities," he said.

But he also accused the United States of choreographing a "coup" in February against a Kremlin-backed leader who upset the West by ditching a closer alliance with Europe and seeking Moscow's economic help instead. "The Ukrainian crisis arose because (ousted president Viktor) Yanukovych postponed the Association Agreement with the European Union," Putin told an economic forum in his native city of Saint Petersburg. "This was followed by a coup backed by our American friends and as a result there is chaos and full-scale civil war."

Friday's fighting pitted a volunteer force attached to the Ukrainian army against militants armed with heavy machine guns and backed by at least one armored vehicle. An AFP photographer saw seven bodies near the village of Karlivka northwest of Donetsk. Four of the dead appeared to be rebels and the rest from the so-called Donbass volunteer battalion that has backed government troops since the fighting first broke out in early April.

Battalion commander Semyon Semenchenko described in a rapid-fire series of Facebook posts how his unit was ambushed and then surrounded after taking refuge in a vacant building along the main road. "Exactly half our unit has been wounded. Many have lost lots of blood," he said. Semenchenko later appealed on the rebels "to agree to a truce in exchange for a prisoner swap."

Eighteen soldiers were killed in separate attacks in Donetsk and the neighboring region of Lugansk on Thursday in the heaviest loss for the military since launching what it calls an "anti-terrorist" operation against the rebels that has claimed around 150 lives.

The West has threatened Russia with painful sanctions against entire sectors of its troubled economy should it be deemed to have disrupted an election that is almost certain to bring a new pro-Western leader to power.

Sunday's vote is seen as the most crucial since Ukraine's independence in 1991 with the country facing the threat of partition and teetering on the brink of economic collapse.

German Chancellor Angela Merkel called on Putin to accept the assessment of about 1,000 observers from the Organization for Security and Cooperation in Europe who will monitoring the election throughout the country of 46 million people. "I expect Russia to respect the doubtlessly objective assessment of the OSCE -- after all it is a member of the organization," Merkel said in interview with the Saarbruecker Zeitung newspaper.

Moscow has responded to the pressure by ordering the withdrawal of some 40,000 troops massed along its western neighbor's border since the annexation of Crimea in March.

Kiev media say the election is crucial to give people a chance to unite behind a legitimate leader after months of unrest that have exposed a deep cultural divide between Ukraine's Russian and Ukrainian speakers. But Kiev's interim leaders admit they will have a tough time making sure polling goes smoothly in restive eastern provinces that are home to nearly seven million Ukrainians and represent the country's vital coal and steel belt.

The guerrillas have in recent days seized 18 of the 34 election commissions in the eastern Lugansk and Donetsk regions in their bid to undermine the vote. The rebels on Thursday also took control of four Lugansk coal mines in the first such attack on a strategic industrial site.

Ukraine's National Security and Defense Council chief Andriy Parubiy conceded that "there might be some places near Slavyansk, Lugansk and Donetsk where there can be some problems." But he stressed that "we are certain that the election in most places of the Donetsk and Lugansk regions will run under the full control of the Ukrainian authorities."

The Ukrainian authorities are mobilizing more than 55,000 police and 20,000 volunteers to ensure security on polling day. "The election will take place under any circumstances and we will get a legitimately elected president," said deputy Central Election Commission chief Andriy Magera.
Last Update: May 24, 2014 2:42 am
RELATED TOPICS