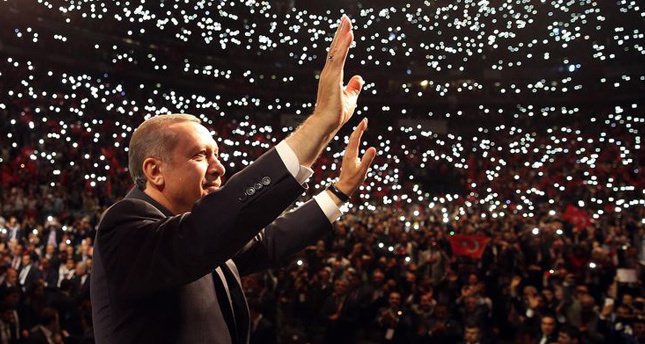 by Anadolu Agency May 25, 2014 12:00 am
BERLIN — German newspapers on Sunday dedicated a larger space to Prime Minister Recep Tayyip Erdoğan's adress to Turks in Germany and the protests.

Tagesschau: In his speech in front of 18 thousand fans at Lanxess Arena, Erdoğan said there are powers who want to prevent the rise of Turkey. Those who are opposition to the Turkish Government, rhetorically repeat the same lies and slanders, said Prime Minister Erdoğan.

Prime Minister Erdoğan was upset with the people who offensively criticized his government.

Erdoğan criticized the German media, in particular the "Spiegel", accusing the "Spiegel" for manipulating the tragic mine disaster of Soma for their own purposes to insult him.

Der Spiegel: "Erdoğan's counterattack". Turkey's Prime Minister Erdoğan arrived in Cologne and was welcomed like a famous pop star by thousands of his supporters. Erdoğan's speech had a mixture of stained honor, pride and tour de fource. It is favorably received by the Turks living here, because they feel the same way"

TAZ: " A celebration with a leader! Tens of thousands of people protested Turkey's Prime Minister Erdogan 's speech while thousands cheerfully welcomed him."