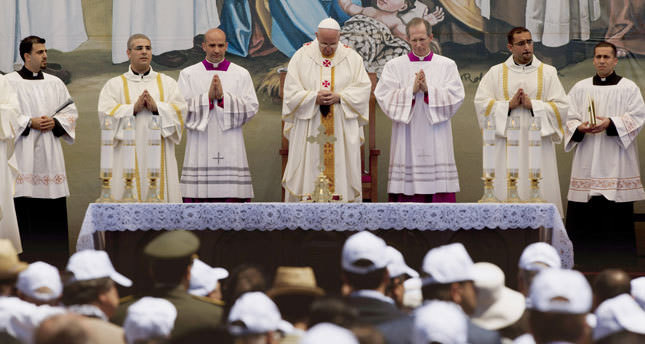 by May 25, 2014 12:00 am
Bethlehem, West Bank — Pope Francis on Sunday invited Palestinian President Mahmoud Abbas and his Israeli counterpart, Shimon Peres, to come to the Vatican to pray jointly for peace.

"I wish to invite you, President Mahmoud Abbas, together with President Shimon Peres, to join me in heartfelt prayer to God for the gift of peace. I offer my home in the Vatican as a place for this encounter of prayer," Francis said in the biblical West Bank city of Bethlehem.

"Building peace is difficult, but living without peace is a constant torment. The men and women of these lands, and of the entire world, all of them, ask us to bring before God their fervent hopes for peace," he added.

The invitation came after Francis delivered a message of unity to a crowd of thousands celebrating Mass in Bethlehem's Manger Square. It
was the second of a three-day pilgrimage to the Holy Land by the pontiff.

"What a great grace it is to celebrate the Eucharist in the place where Jesus was born," he told local Christians, many of whom were waving Palestinian and Vatican flags and cheering "Viva il Papa!"

Francis landed earlier by helicopter in Bethlehem from Amman, Jordan and walked down a red carpet, holding hands with Palestinian President Mahmoud Abbas and welcomed by a Palestinian honour guard.

Hailing Abbas as "a man of peace and a peacemaker," the pontiff called on Israelis and Palestinians to make "sacrifices" for peace.

"In expressing my closeness to those who suffer most from this conflict, I wish to state my heartfelt conviction that the time has come to put an end to this situation, which has become increasingly unacceptable," he said at Abbas' presidential palace in Bethlehem.

Abbas, who has conditioned a revival of peace talks on Israel freezing Jewish settlement construction and releasing jailed Palestinian militants, said Francis' visit was a "message to the entire world reminding it of the difficulty of life in Palestine."

"From here I send also a message to our neighbours the Israelis," he added. "Come and let's make peace based on truth, justice, equality and mutual respect."

The Argentinian-born pontiff made a detour from his published itinerary by visiting Israel's controversial West Bank security wall, which cuts off Bethlehem from nearby Jerusalem. Palestinians said the visit came after a request from Abbas.

The pilgrimage by the spiritual leader of the world's 1.2 billion Roman Catholics comes one months after intense US-sponsored peace negotiations collapsed.

"We welcome Pope Francis to the land of Israel," Israeli Prime Minister Benjamin Netanyahu told his cabinet in Jerusalem. "We appreciate the strong stance of the pope against anti-Semitism."

But even the pope's most ardant fans gathered in a festive Manger Square, near the Church of the Nativity built on the grotto where Christians believe Jesus was born, were skeptical he could help bring to an the the long-running conflict between Israelis and Palestinians.

"This region needs someone like Pope Francis to help it overcome its problems. He can try, but frankly I do not think he can change anything," Nadia Daoud, 60, a Palestinian Christian from the northern Israeli port city of Haifa, told dpa.

Some 23,000 Palestinians from the West Bank and 600 from the Gaza Strip were given permits allowing them to pass through Israeli military checkpoints and enabling access to Bethlehem and Jerusalem.

Israeli police arrested 26 Jewish extremists near a Jerusalem holy site, which the pontiff is due to visit Monday, spokesman Micky Rosenfeld told dpa, describing the area as "pretty tense."

Some 150 people throwing bottles protested against rumours that Israel would transfer sovereignty of the so-called David's Tomb to the Vatican. Police removed them from the building and cordoned it off. Three officers were lightly injured.

The ancient building, on Mount Zion overlooking the walled Old City, houses the Cenacle, the room where the Last Supper was believed held, but the lower level is also a synagogue, with the alleged tomb of King David, and has served as a mosque too.

Some 8,000 police - almost a third of Israel's total force - are securing Jerusalem for the papal visit.

On Sunday evening, the pontiff is to hold talks with the patriarch of Constantinople, Bartholomew, to mark the 50th anniversary of a meeting that assuaged historic divisions between the Roman Catholic and Orthodox churches.

The meeting is being described by the Vatican as a highlight of the papal trip.

He will meet Palestinian refugee children Sunday in Deheishe camp near Bethlehem, before flying to Tel Aviv - and from there to Jerusalem.

He opened his pilgrimage on Saturday by visiting Jordan, where he met with Muslim and Christian leaders in Amman, and called for an
"urgent" end to the civil war in Syria. The pontiff met with a group of refugees who said they had found "strength" in his visit.

Francis has presented his trip as "strictly religious," but the decision to fly to the West Bank from Jordan, avoiding land crossings controlled by Israel, and Vatican references to the "state of Palestine," have pleased Palestinians and irked Israelis.

Palestinians have criticized papal plans to lay flowers at the grave of Zionist movement founder Theodor Herzl - a first for a pontiff.

On Monday, Francis is also due to pray before the Western Wall in the Old City of Jerusalem, one of the holiest sites for Jews, and visit
the Yad Vashem Holocaust Memorial Centre.