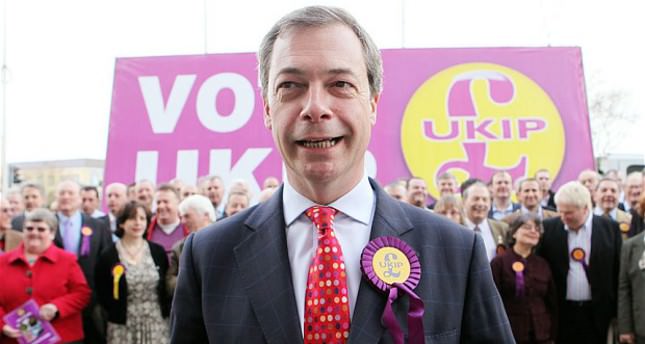 by May 26, 2014 12:00 am
BRUSSELS — In Britain, the eurosceptic U.K. Independence Party (UKIP) led by Nigel Farage - a party without a single seat in the national parliament - surged Thursday in local council polls held in parallel with the EU vote, rocking the establishment.

Turnout too is likely to reflect growing popular exasperation with the EU, dropping even further from the record low of 43 percent in 2009. The polls suggested the mainstream parties, the center-right conservatives and center-left socialists, would hold about 70 percent of the seats in the next parliament.

Traditionally they have worked together much of the time and should be able to continue to do so, analysts said. Faced with mounting hostility to the Brussels bureaucracy and the harsh austerity policies adopted to overcome the debt crisis, EU political leaders have worked hard to correct a so-called "democratic deficit." For the first time, the five main groups in parliament named candidates to be the next head of the powerful European Commission and sent them out on the campaign trail. They also organized televised debates between candidates, exposing them to the harsh light of public questioning.

Summing up the hopes of reconnecting with the bloc's 500 million people, a giant banner hung at EU headquarters in Brussels read: "This time it's different - Your vote counts." Analysts have their doubts, however, on that point. "The European Parliament's bid to politicize and personalize the vote has not worked," said Jean-Dominique Giuliani of the Robert Schuman Foundation. Instead, the eurosceptics and more radical groups have picked up support on anti-immigrant and anti-EU issues made doubly sensitive when 26 million people are out of work, including more than half those under 25 in countries such as Greece and Spain. "It's clear that these elections cannot just go on like this because people simply do not consider the European parliament to have political weight," Techau said. "There will have to be substantial reforms."
RELATED TOPICS