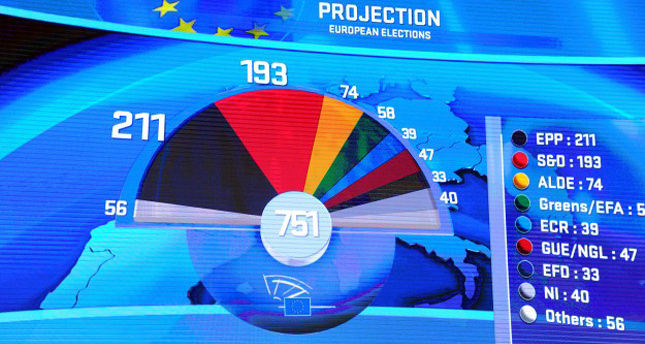 by May 26, 2014 12:00 am
BRUSSELS — Far-right and Euroskeptic parties made sweeping gains in European Parliament elections Sunday - triggering what one prime minister called a political "earthquake" by those who want to slash the powers of the European Union or abolish it altogether.

Voters in 21 of the EU's 28 nations went to the polls Sunday, choosing lawmakers for the bloc's 751-seat legislature. The other seven countries in the bloc had already voted in a sprawling exercise of democracy that began Thursday in Britain and the Netherlands.

One of the most significant winners was France's far-right National Front party, which was the outright winner in France with 26 percent support- or 4.1 million votes.

"The sovereign people have spoken ... acclaiming they want to take back the reins of their destiny," party leader Marine Le Pen said in a statement. She called the results "the first step in a long march to liberty."

The National Front like other far-right parties across Europe promote anti-immigrant and often anti-Semitic policies.

The first official results announced late Sunday had UKIP at about 30 percent, some 12 percent higher than the last European elections in 2009.

The big winner in the elections was the populist, opposition Danish People's Party, which won three more seats for a total of four. A year-old party in Germany that wants that country to stop using the euro single currency reportedly won 6.7 percent of the vote.

In Greece, with a quarter of the votes counted, the leftist Euroskeptic Syriza party led with 26.49 percent. The extreme right Golden Dawn party was third with 9.33 percent.

In the Netherlands, however, the right-wing Euroskeptic Party for Freedom surprisingly dropped a seat from five to four. Its outspoken leader, Geert Wilders, said in a statement his party looked forward to working with Le Pen in Europe, calling the National Front leader "the next French president."

Despite the gains, unity may be hard to find in the fractured Euroskeptic camp.

Voters also put new parties in the European Parliament, with preliminary results showing that Sweden elected the first lawmaker from a feminist party and the Dutch returned one representative for the Party for the Animals.