Ukraine's 'Chocolate King' winks at both Russia and the West 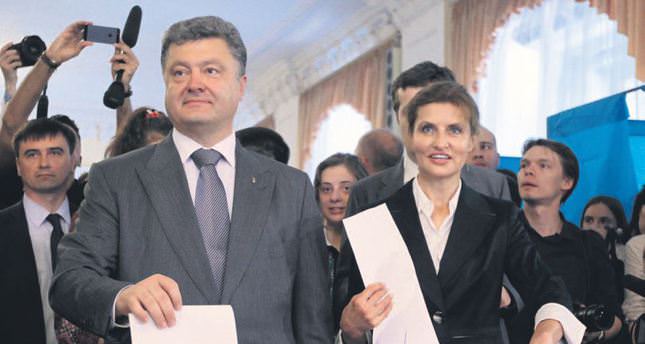 As many Ukrainians went to the polls amid ongoing civil unrest in eastern Ukraine, the 'Chocolate King' Petro Poroshenko, a front-runner for the presidency, sees the country's future in Europe while hoping to heal relations with Russia

DONETSK — Ukraine's critical presidential election was held on Sunday as the country looks to elect a new Ukrainian president for a five-year term hoping to bring back stability to the country that has long been suffering from deadly violence in its sprawling eastern regions. A total of 21 candidates ran for the presidency, among them, Petro Poroshenko, the 48-year-old billionaire who made his fortune from chocolates, a front-runner for Sunday's elections. According to opinion polls, he is expected to receive a significant number of the votes while having a huge lead over the other candidates; Yulia Tymoshenko, Serhiy Tihipko, Mykhailo Dobkin and Oleh Tyahnybok who are among the top five most favorable candidates.

However, if Poroshenko is not able to gain the majority of votes, there would be a presidential runoff between the two leading contenders, taking place on June 15. However, Poroshenko clearly stated in his electoral campaign in May that holding a second round of elections would boost civil anxiety; thereby put Ukraine's future in jeopardy as it might bring more instability to the country.

Known as the "Chocolate King", Poroshenko kicked off his presidential campaign with a slogan of "A new way of life." If he ever becomes the first elected official amid long-standing Ukraine's crisis, Poroshenko, as a pro-EU candidate, pledges to enhance the relationship with Russia on the path to becoming a European member state. He sees Ukraine's future in Europe while drawing attention to the necessity of mending relations with Russia in order to halt the civil unrest in eastern Ukraine, thereby bringing stability to the country.

However, he does not favor Ukraine joining NATO, considering it a bad idea with regards to the path of forming stability not only in Ukraine but the whole region. As a former minister of trade and head of the council that runs the national bank, economic reforms, decentralization, growing investment possibilities are also on his agenda in order to facilitate Ukraine's political and economic integration to the European Union.

Apart from being a wealthy businessman who controls a large confectionery group called "Roshen" and some other enterprises including cars, bus plants and 5 Kanal TV, the most popular news channel in Ukraine, he has actively taken part in Ukrainian politics. He was one of the main figures of the Orange Revolution that brought Yushchenko and Tymoshenko to power in 2004. From 2009 to 2012, he was foreign minister in Tymoshenko's government and elected as an economic development and trade minister in 2012. As civil unrest has made voting difficult, security concerns for the Ukrainian government has led to additional measures being taken to make the atmosphere safer. The international community has made several attempts so far to prevent any possible attacks on places where voting took place as 900 observers were sent to Ukraine to monitor the election.

The election process would be seen as challenging in many eastern cities, the most conflict-prone zones. After the declaration of "people's republics" outside Kiev's control on May, 11 whether the voting has been taking place in those eastern regions has become a highly controversial issue. However the latest reports show that in the city of Donetsk, some polling stations were closed thanks to an attack by several gunmen. The pro-Russian rebels consider Ukraine's government as an illegal authority.

Many government buildings have been sized by the pro-Russian groups while some parts of the Donetsk region remained under greater government control due to security concerns. As Ukrainians voted for their new president, there have still been some clashes continuing between government forces and pro-Russian rebel groups.

Rome's foreign ministry announced that an Italian journalist, Andrea Rocchelli, 30, was killed Saturday in Slavyansk, in eastern Ukraine during a mortar shell attack. The latest developments show that the armed rebel groups massed outside the home of Rinat Akhmetov, the richest man in Ukraine in the eastern city of Donetsk on Sunday.

Akhmetov has become the target of rebel groups after he changed his position and gave his support to the Ukrainian government. Taking into consideration the Ukraine crisis, the presidential election is expected to bring stability to both Ukraine and the region. After a long dispute between Russia and the U.S. and European Union on the ground of serious sanctions, Putin declared that Russia will support the presidential elections.

Russia has long faced serious criticism from Western countries over the Ukraine crisis. Meanwhile, President Vladimir Putin said that he does not believe there will be a new Cold War with the U.S., and Russia does not want it. He also criticized Britain's Prince Charles' reported recent remarks comparing him to Hitler as "unacceptable" and "not royal behavior."
RELATED TOPICS