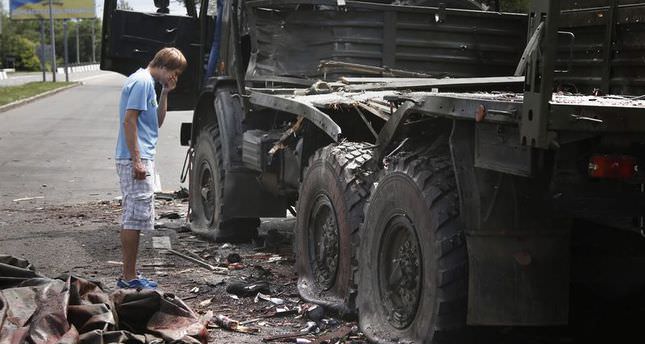 The Ukrainian army has moved into Donetsk, a city of 1 million in the east of the country, to quell the uprising by pro-Russian militants. More than 50 fighters and dozens civilians have been killed as helicopters and paratroops wage battles in urban regions

Pro-Russian rebels said yesterday that more than 50 of their fighters had been killed in Donetsk in eastern Ukraine. The mayor of Donetsk, an industrial hub of 1 million in eastern Ukraine, said the death toll in the clashes which erupted on Monday stood at 40, including two civilians.

Ukraine used air strikes and a paratroop assault on Monday to clear rebels from Donetsk's international terminal and had pushed the separatists out of the complex by the end of the day. But shooting continued through the night and on Tuesday the road to the airport bore signs of fighting overnight and heavy machinegun fire could be heard in the distance in mid-morning.

"The airport is completely under control," Interior Minister Arsen Avakov told journalists in the capital Kiev. "The adversary suffered heavy losses. We have no losses," he added. "We'll continue the anti-terrorist operation until not a single terrorist remains on the territory of Ukraine," First Deputy Prime Minister Vitaly Yarema said on the margins of a government meeting.

"We have 29 or 30 dead on our side but that is not the final count yet," said Dima Gau, a rebel representative.

Donetsk Mayor Alexander Lukyanchenko said 40 people had been killed in the past day, 38 of the bodies being of those involved in fighting around the airport.

Russian President Vladimir Putin on Tuesday called for an immediate end to what he described as a "punitive" operation by military forces in east Ukraine and for talks between Kiev and pro-Moscow rebels.

In a call with Italian Prime Minister Matteo Renzi, Putin "underlined the need for an immediate end to the military's punitive operation in southeastern regions and the establishment of peaceful dialogue between Kiev and regional representatives," the Kremlin said in a statement.

Ukraine launched the fresh offensive against the rebels, who have occupied strategic points in Donetsk and other towns in the east, after Ukraine's newly elected president rejected any talks with "terrorists."

Petro Poroshenko, a 48-year-old billionaire oligarch, won overwhelming support in Sunday's election that many hope will end six months of upheaval. He said a robust military campaign in the east should be able to put down a separatist revolt in "a matter of hours."

A Kamaz truck of the type rebels use to ferry their fighters was seen by reporters wrecked on the airport road, covered in blood and completely riddled with bullet holes. Blood had spattered across the entire roadway and even reached a billboard seven meters above.

Outside the city center, another Kamaz was flipped over, its deck covered in blood.

It was too early to say if the apparent military successes of government forces could break the rebellion in Donetsk, the first of a rash of such revolts across eastern Ukraine after months of turmoil in the capital that led to the ousting of the Moscow-backed president, Viktor Yanukovich.

In Donetsk on Tuesday a hockey stadium was set ablaze, though firefighters managed to bring it under control.

The mayor reinforced warnings for people to avoid the airport area and said nine schools and two hospitals had been closed, with patients evacuated elsewhere. He reassured people that food and other supplies were still reaching the city.

Three civilians told Reuters they had fled their home near the airport and were heading into central Donetsk.

"We spent all night in the cellar and the fighting started up all over again today at 7 a.m.," said a middle-aged woman who declined to give her name.
Last Update: May 27, 2014 10:55 pm
RELATED TOPICS