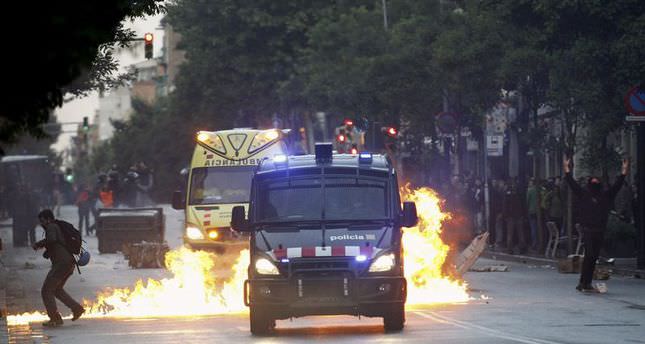 by AA May 28, 2014 12:00 am
MADRID — Protests have turned violent in Spain's Barcelona on Monday against the evacuation and demolition of an old building occupied by leftist groups for the last 17 years.

The protesters in the Sants neighborhood of the eastern Spanish city continued to riot after the Catalunya regional police force "Mossos d'Esquadra" evicted twelve squatters on Monday from the building of CSOA Can Vies social center in accordance with a court order.

To challenge the eviction, the protesters set several trash bins and vehicles on fire, and clashed with the police force.

The protests flared up late Tuesday when around 500 masked protesters gathered outside the building and set ablaze the demolition equipment assigned to pull the building down.

They reportedly burnt some ATMs and clashed with the riot police trying to disperse the crowd. The police then temporarily blocked the roads to the building and the subway station in the area.

Fire brigades were also deployed to the area to put out the fire.

Reports say that protests continued overnight in the neighborhood.