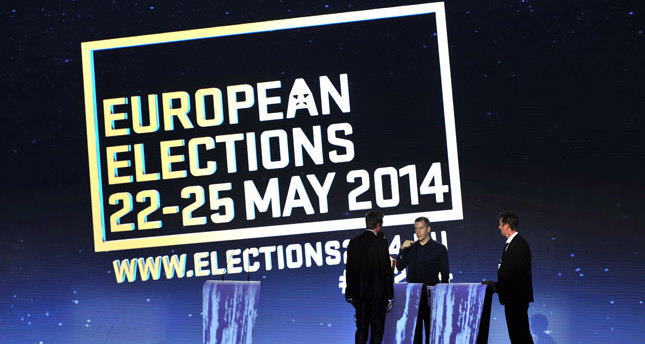 by May 28, 2014 12:00 am
BRUSSELS — European leaders held a summit in Brussels yesterday, their first chance to digest the stunning success of Eurosceptic and far-right parties at EU polls which has shaken the continent's political landscape.

France's President Francois Hollande called Monday for Brussels' power to be reined in after what newspaper headlines called an "earthquake" in Europe. That tremor was delivered by European voters backing eurosceptics in a stinging rebuke to Brussels, with France's National Front (FN) and Britain's UKIP leading the pack of anti-EU parties. Hollande went on national television to call for the EU to reduce its role, which he said had become for many citizens "remote and incomprehensible".

The embattled leader saw the far-right National Front (FN) come out on top in France's vote, pushing his Socialist Party to a humiliating third place in the elections for seats in the European parliament.

"This cannot continue. Europe has to be simple, clear, to be effective where it is needed and to withdraw from where it is not necessary," Hollande said in his address to the nation.

Across the Channel, British Prime Minister David Cameron faced a similar sentiment from voters, with the anti-EU UK Independence Party's victory at the ballot box.

The European leaders will meet from 1700 GMT to take stock after the four days of voting across the 28-nation bloc, which came to a close on Sunday. They will also discuss the election of the next president of the European Commission, the head of the EU executive. The crisis in Ukraine is also on the agenda. Ahead of the Informal European Council in Brussels on Tuesday, Cameron spoke to several of his counterparts saying they should learn from the election results, a statement from his Downing Street office said.

"The PM has been making the point... that leaders should seize the opportunity of tomorrow's dinner to heed the views expressed at the ballot box that the EU needs to change and to show it cannot be business as usual," it said.

Cameron spoke to German Chancellor Angela Merkel, who experienced a different result with her own conservative party winning the poll in Germany.

"It's quite remarkable and regrettable but now the point is to win those voters back," said Merkel in reaction to the anti-EU trend elsewhere.
"A policy of competitiveness, growth and jobs is the best answer to the disappointment of those who voted in a way that we don't like," she said.

The pro-European Union parties must offer disillusioned voters the real prospect of jobs and growth, said French Prime Minister Manuel Valls, who ruled out stepping down after just weeks in office.

"Certainly there is a message across Europe of disillusionment with Europe and the EU has got to hear that loud and clear," said Foreign Secretary William Hague in Britain, where Nigel Farage's UKIP took 27 percent of the vote with Labour second and the Conservatives third.
RELATED TOPICS