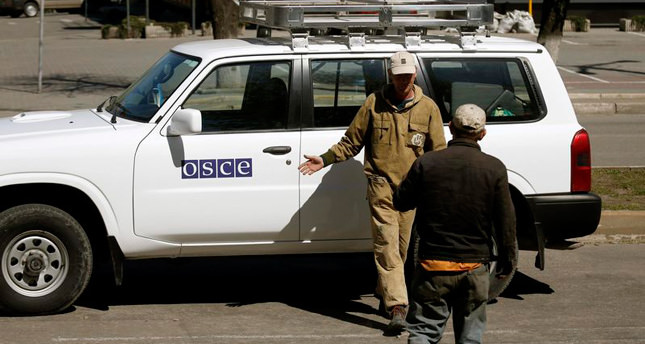 by AA May 28, 2014 12:00 am
DONETSK — The OSCE said in a written statement that communication was lost with the four observers, a Donetsk based team, on Monday at 5 pm Turkish time.

A Turkish citizen is one of four Donetsk-based observers from the Organization for Security and Co-operation in Europe (OSCE) who have gone missing in Donetsk, the organisation says.

The OSCE said in a written statement that communication was lost with the four observers, a Donetsk-based team, on Monday at 5 pm Turkish time.

"The team was on a routine patrol east of Donetsk when contact was lost. We have been unable to re-establish communication until now. The team consists of four international SMM members," according to statement on OSCE's website.

Reuters reports that the four -- an Estonian, a Swiss, a Turk, and a Dane -- encountered a road checkpoint on Monday evening and have not been heard form since.

The issue was raised by Turkey's Foreign Minister, Ahmet Davutoglu during a meeting with his Russian, Swedish and Danish counterparts in Russia, according to a statement from the ministry.

"OSCE's special monitoring missions are working independently and selflessly to contribute the safety and stability of Ukrainian people. It is obligatory for both sides in Ukraine to act with deference towards the missions," said a statement issued by Turkey's foreign ministry on Wednesday.