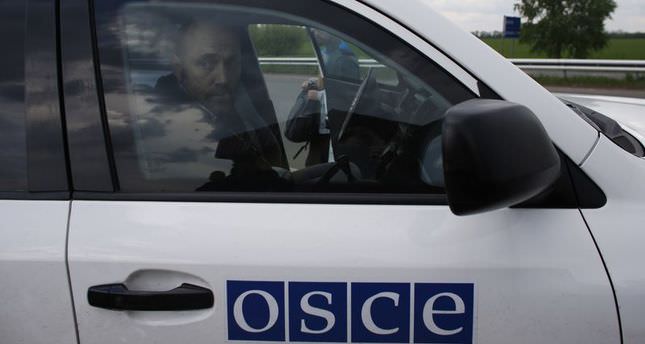 by May 29, 2014 12:00 am
DONETSK — Pro-Russian separatists are holding four monitors of the Organization of Security and Cooperation in Europe (OSCE) who went missing in eastern Ukraine on Monday but are likely to release them soon, a rebel leader said on Thursday.

Vyacheslav Ponomaryov, whose separatist group controls the town of Slaviansk, told Reuters the OSCE had been warned not to travel in the area, but had sent a four-man team out all the same.

"They were detained. The reason for this was they should not come here and interfere because I warned them," he said by telephone.

"We'll sort things out with them. We'll look at their documents and (then) let them go. Talks are going on with the OSCE," he said.

"If we ask them not to go somewhere, they should take heed of our opinion," he said, adding that the monitors were being held somewhere south of Donetsk, the main regional hub.

The team, which comprises a Dane, a Turk, an Estonian and a Swiss, are among a few hundred monitors sent to monitor compliance with an international accord for de-escalating the crisis in troubled eastern Ukraine, where separatists have seized control of strategic points in several towns.

The Vienna-based OSCE is Europe's security watchdog. Russia and Ukraine are both members of the organization.