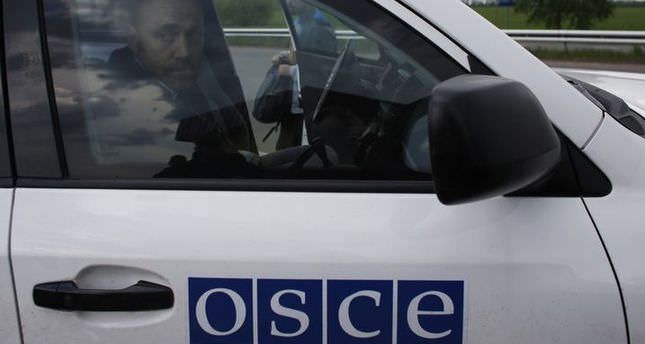 by Daily Sabah May 30, 2014 12:00 am
DONETSK — In the midst of heavy clashes this week , after separatist rebels claimed holding four monitors of the Organization of Security and Cooperation in Europe (OSCE), AFP reported that the Vienna-based security body had lost contact with a second four-member international team in Lugansk in eastern Ukraine.

OECD said that after the monitor team was stopped at a rebel checkpoint in the town of Severodonetsk, a city of Luhansk in south-eastern Ukraine, it had not heard from its team which "was comprised of four international monitors and a Ukrainian translator."

In addition, the separatist leader Alexei Chmilenko told Interfax yesterday that the European observers who were being held since Monday, have been freed. However, there have been no further statement made by OSCE to confirm their release.

This is not the first time European observers have been abducted by pro-Russian rebel groups. On Wednesday the OSCE reported that it had lost contact with another 11 observers near Donetsk, but the group got back in touch later in the day. Seven OSCE-linked military observers were held by rebels for a week in Sloviansk.

The Special Monitoring Mission currently has 210 unarmed civilian members from European nations and 70 local staff who are sent to the troubled area to monitor the security situation following Russia's annexation of Crimea and a pro-Russia separatist insurgency.