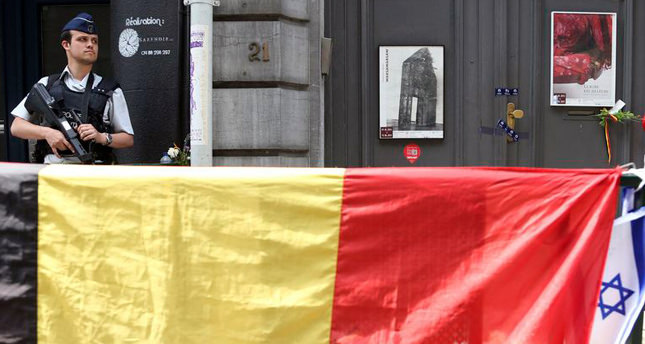 by AA Jun 02, 2014 12:00 am
BRUSSELS — The 29 year old French citizen is believed to have recorded the claim in a 40 second video found in his possession along with a Kalashnikov and a handgun, French authorities say.

The French shooter who killed four people in the Jewish Museum in Brussels last week admitted the attack in a 40-second video, according to a French prosecutor.

Mehdi Nemmouche, the 29-year-old French citizen, who was arrested in the southern French city of Marseilles for killing four people in the Jewish Museum in Brussels last week, is believed to have recorded the claim in a 40-second video found in his possession along with a Kalashnikov and a handgun.

The "repeat offender" explains in the record that he had attached a GoPro camera to his bag to record his shooting rampage, but it had not worked, revealed Paris prosecutor Francois Molins.

"Nemmouche, had a criminal record, with seven convictions for attempted robbery, but not for terrorism related crimes," said Molins.

Instead Nemmouche later "filmed his weapons and said he carried out the attack against the Jews in Brussels," Frederic Van Leeuw, Belgian Federal prosecutor told a press conference in Brussels on Sunday.

However, Van Leeuw added said that it is yet to be confirmed if it is Nemmouche's voice on the recording.

The Belgian police are also looking for a possible terrorist link, as the suspect had allegedly fought as a member of Syrian opposition forces in 2013.

In the images released by the police, the attacker with his face covered, was seen entering the building and firing a Kalashnikov rifle numerous times. After the shooting, the killer left the building into a crowded street, where he disappeared.

Meanwhile, French Interior Minister Bernard Cazeneuve told Europe 1 radio on Monday that police had carried out a series of raids on jihadists in France, but did not confirm if the killings and the arrests are related.

"There have been four arrests in the Ile de France region (Paris) and in the south of France... We want the hunt to be thorough, we don't want to leave any opportunity to the terrorists," said Cazeneuve.