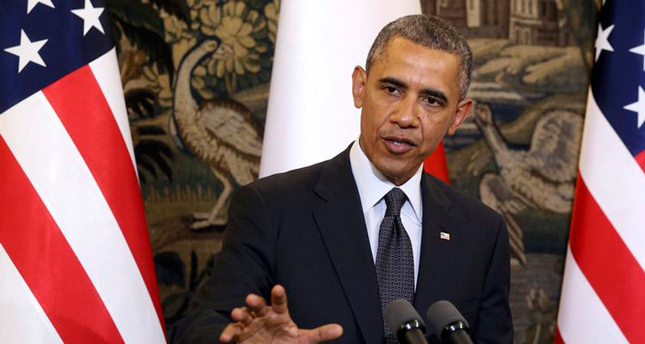 by Jun 03, 2014 12:00 am
WARSAW — President Barack Obama assured Poland and its eastern European neighbors on Tuesday that the U.S. commitment to their security was sacrosanct at the start of a four-day trip meant to show U.S. resolve after the Russian intervention in Ukraine.

The White House unveiled plans for a $1 billion initiative to send more of its military to Europe on a temporary basis but stopped short of promising to beef up its permanent presence as some of Washington's allies are seeking. It said the United States would review its force presence on the continent.

Speaking in an aircraft hangar at Warsaw airport where he met U.S. airmen taking part in a joint program with the Polish air force, Obama said U.S. commitments to Poland and the region were a cornerstone of the United States' own security.

"As friends and allies we stand united together," said Obama, whose two-day stay in Warsaw will include meetings with Ukrainian President-elect Petro Poroshenko and other central and eastern European leaders.

Obama is under pressure from critics at home, who say he is not showing enough firm leadership on the world stage, and from some NATO allies in eastern Europe who fear they may be the next targets for Russian expansion and want more U.S. protection.

But Western powers must also strike a delicate balance, because a big increase in NATO forces on Russia's borders could prompt reciprocal steps from the Kremlin and spiral into an arms race.

NATO defense ministers meet in Brussels on Tuesday to look at long term measures to strengthen alliance defenses in eastern Europe and consider how to combat the tactics used by Russia in Ukraine.

U.S. Secretary of State John Kerry, also in Warsaw, said how to respond to the crisis in Ukraine would be a focus of Obama's meetings in Poland.

"We are here today because this remains a new moment of challenge for all of us," Kerry told reporters.

"Events in Ukraine have unfortunately unleashed forces that we had all hoped had been put away ... were behind us. So it requires new vigilance and it requires clear commitment."

The military assistance proposed by the White House, called the European Reassurance Initiative, is to include greater U.S. participation in training and exercises, deploying U.S. military planners, and more persistent naval deployments in the Black Sea and Baltic Sea, on Russia's doorstep.

The White House said in a statement it would build the capacity of Ukraine and two other Western-leaning countries on Russia's borders, Georgia and Moldova. Obama would be seeking the support of the U.S. Congress for the plan, it said.

"In addition to this initiative, we are reviewing our force presence in Europe in the light of the new security challenges on the continent," it said.

"These efforts will not come at the expense of other defense priorities, such as our commitment to the Asia Pacific rebalance."
Obama's visit to Poland coincides with the "Freedom Day" anniversary in Poland, which marks the holding of the country's first partially-free elections 25 years ago.

Later in the week, Obama travels to Brussels for a meeting of Group of Seven leaders and then to France for the commemoration of the 70th anniversary of the D-Day landings in World War II.