Support for independence grows in Scotland 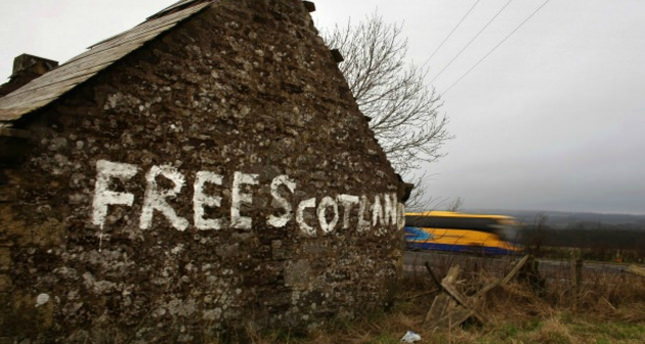 by Anadolu Agency Jun 03, 2014 12:00 am
EDINBURGH — Scotland's pro-independence campaign is gaining ground ahead of a September referendum to decide whether the country should break away from the United Kingdom, according to a poll on Monday.

But time may be running out for the secessionists to make their case to break up the 307-year-old union, as falling support in more deprived areas and a lack of support among women leaves substantial ground to be made up in just over 100 days.

An Ipsos MORI poll found that support for independence had grown to 36 percent, up four points on its last poll in February, whereas the proportion of those rejecting independence fell three points to 54 percent.

Ignoring the 10 percent who are undecided, 60 percent of people who are certain to vote in the Sept. 18 referendum back staying in the UK, the poll found.

As the official campaign period starts, public interest in the vote appears to be building, with over fourth-fifths of those questioned saying they would definitely vote.

"The Yes (to independence) campaign has made some significant progress in persuading the public in recent months. They will hope that this represents momentum that will see support continue to grow," said Mark Diffley, director at Ipsos MORI Scotland.

"However, it is clear that the No campaign retains a healthy lead and, with the referendum fast approaching, there would need to be significant change in opinions if Yes is going to win."

The Scottish National Party has sought to capitalise on discontent at the cuts of the current UK coalition government, as well as policies such as the so-called "bedroom tax" which are seen as affecting the poor disproportionately.

But despite their efforts to make Britain's government seem out of touch, support for independence in Scotland's most deprived areas fell to 41 percent, suggesting that pro-union arguments that the prospects for a post-independence economy are more uncertain is having an effect.

The gender divide among Scotland's four million voters remains however. Men were equally split over whether or not to back independence but only 28 percent of women wanted to break away from the union.

The results are based on a survey of 1,003 respondents conducted by telephone.