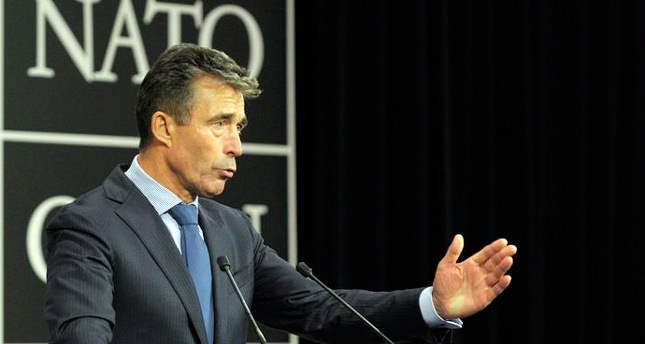 by AA Jun 04, 2014 12:00 am
BRUSSELS — NATO Secretary General Anders Fogh Rasmussen linked Russia's actions in Ukraine to its involvement in Georgia on Wednesday, while praising the latter's efforts to reform its military.

"Russia's aggression against Ukraine has repercussions for Georgia as well," said Rasmussen in his opening remarks at a meeting of defense ministers in the framework of NATO-Georgia Commission in Brussels.


He also denounced Russia's annexation of Crimea as well as its previous recognition of the South Ossetia and Abkhazia regions of Georgia as independent states.


"NATO allies do not and will not recognize Russia's illegal annexation of Crimea and neither do we accept Russia's recognition of the South Ossetia and Abkhazia regions of Georgia as independent states", he said


In August 2008, Georgia and Russia fought a brief war. After the six-day conflict, Moscow recognized the independence of Georgian breakaway regions Abkhazia and South Ossetia.


Today's meeting comes amid a two-day summit gathering defense ministers from NATO's 28 member countries to discuss "the current status of Georgia's defense reforms, and plans for further work" as well as the implications of Russia's annexation of Ukraine's Crimean territory.


The NATO-Georgia Commission (NGC) was established in September 2008 to serve as a forum for both political consultations and practical cooperation to help Georgia achieve its goal of a NATO membership.

Rasmussen stated that the ex-Soviet republic will become a member of the Western military alliance if it meets the necessary criteria.