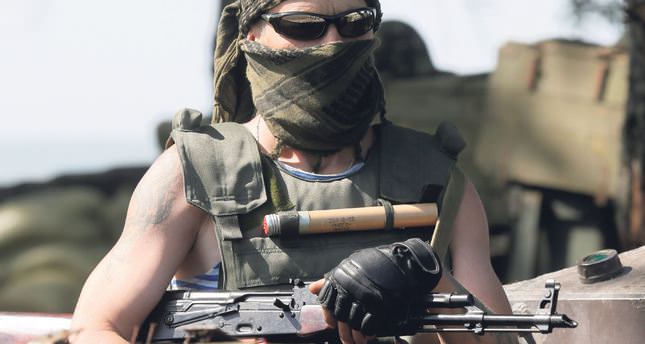 The brother of detained Turkish OSCE observer spoke to Daily Sabah, claiming more efforts are required to save the Donetsk team abducted by pro-Russian rebel groups in eastern Ukraine

DONETSK — Bünyamin Kılıç, the brother of one of the detained Organization for Security and Co-operation in Europe (OSCE) observers, told Daily Sabah that the OSCE's continuing efforts have been insufficient to convince the separatist group to free the monitoring team detained in the Donetsk region, adding that establishing strong contacts with Russia, a member of the OSCE, would accelerate the release of the monitoring team. "If the OSCE seriously wants them released, then they can make it happen," said Kılıç. He also underscored that pro-Russian separatist groups still hold the four observers to use against an expected military operation by Ukrainian authorities on Donetsk city.

The four OSCE observers that went missing near the eastern Ukrainian city of Donetsk are nationals of Estonia, Turkey, Switzerland and Denmark. The OSCE special observer mission in Ukraine has stated that they lost their connection with the group of four monitors on May 26. The team was stopped at a rebel checkpoint, as they were involved in planned patrols of Donetsk's eastern part. According to reports, the observers were being held in the village of Makeyevka, an industrial city located in eastern Ukraine within the Donetsk Oblast.

The monitors had been sent to the troubled eastern Ukraine to monitor the security situation following Russia's annexation of Crimea and a pro-Russia separatist insurgency and compliance with the international accord for assessing the security in eastern Ukraine. The international monitoring mission to Ukraine, headed by Ertuğrul Apakan, a retired Turkish diplomat, operates to monitor the security and human rights conditions in the country. Mehmet Kılıç, one of the detained OSCE observers monitoring team in Ukraine, is married and has an eight-month-old daughter.

After he worked at the Turkish Cooperation and Coordination Agency Directorate (TİKA), he voluntarily joined the Special Monitoring team in Ukraine one month ago. Separatist leader Alexei Chmilenko told Interfax that the European observers, who were being held since May 26, had been freed. However, there has been no further statement made by the OSCE to confirm their release. In addition to the separatist's claim over the alleged release of the Donetsk team, Interfax stated on June 1 that armed supporters of separation of Donetsk Oblast from Ukraine say they have freed all the OSCE observers detained by them. "There are currently no OSCE observers with us. All those who were detained last week have been freed," said the self-styled people's mayor of Slavyansk, Vyacheslav Ponomaryov, as his statements misrepresented the current situation, thus not reflecting the truth.

Massive protests against the new Ukrainian authorities erupted in eastern Ukraine after the Russian annexation of the Crimean Peninsula, which declared independence on March 11 and joined Russia on March 18 following an independence referendum.

Following intense clashes between pro-Russian separatist groups and Kiev forces, the overall security situation in the Donetsk and Luhansk regions remained tense, putting many lives in jeopardy. According to Reuters, pro-Russian separatists continued to attack Ukrainian government forces with mortar fire yesterday in Slaviansk, which has been controlled by separatists since early April.

Considering the political turmoil in eastern Ukraine, Russian President Vladimir Putin and Ukrainian President-elect Petro Poroshenko met for the first time at the DDay anniversary event in France, as to declaring a possible ceasefire agreement to deescalate the crisis. As German Chancellor Angela Merkel told President Putin in talks yesterday, holding Russia accountable to help bring peace to Ukraine, world leaders have held Russia responsible for not putting an end to the crisis in Ukraine.
RELATED TOPICS