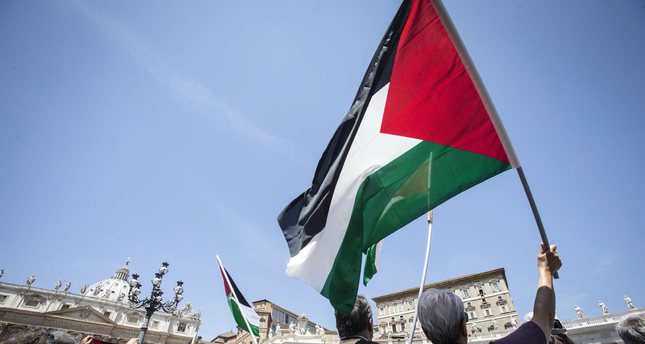 Israeli and Palestinian presidents meet in an unprecedented prayer meeting with Pope Francis on Sunday, a gesture he hopes will "re-create a desire, a possibility" of relaunching the Middle East's stalled peace process.

VATICAN CITY — The Vatican has played down any expectations that the Sunday evening meeting between Shimon Peres and Mahmoud Abbas - billed as a "pause from politics" - will lead to any immediate breakthroughs in the region's tortuous problems and says it is not meddling in regional issues.

"No one is presumptuous enough to think peace will break out on Monday," said Father Pierbattista Pizzaballa, a Church official in charge of Catholic sites in the Holy Land and a key organiser of the encounter.
"The intention of this initiative is to re-open a road that has been closed for some time, to re-create a desire, a possibility, to make people dream," he said, adding that the pope does not want to get involved in details of issues such as borders or settlements.
Israeli Prime Minister Benjamin Netanyahu, the key Israeli decision-maker, is not attending and he refuses to deal with the Palestinian unity government, backed by Hamas Islamists, that Abbas swore in last Monday. Peres will leave office next month.
Netanyahu has made no direct comment on the meeting but in remarks on Sunday at a paramilitary police base in Jerusalem he suggested that prayer is no substitute for security.
"For thousands of years, the people of Israel have been praying for peace daily. But until peace comes, we will continue to strengthen you so that you can continue to defend the State of Israel. Ultimately, that is what will guarantee our future and will also bring peace," he told the troops.
But the fact that Francis' bold move has managed to bring the two presidents together shows his desire to engage political leaders, offering inter-religious dialogue as a building block.
The meeting is taking place more than a month after U.S.-led peace talks collapsed amid bitter mutual recrimination. The pope, in his weekly Sunday address in St. Peter's Square, said he hoped faithful of all religions "will unite themselves spiritually to our plea". The pope made his surprise invitation to the two heads of state while he was in the Holy Land last month.
"NEUTRAL" GROUND
The minutely orchestrated event on a small lawn in the Vatican gardens - a space the Vatican has called "neutral" because it is bereft of religious symbols - will be the presidents' first public meeting in more than a year.
It will also mark the first time that Jewish, Christian and Islamic prayers will be held in the tiny city state that is the headquarters of the 1.2 billion member Roman Catholic Church.
The Palestinian and Israeli delegations will include religious leaders of various faiths. They will pray in the chronological order of the founding of the three religions - Judaism, Christianity and Islam.
At the end of the ceremony, held in Italian, English, Hebrew and Arabic and expected to last about two hours, the pope, Peres and Abbas will make individual addresses, which the Vatican has called "invocations" for peace.
Peres' office said he will "call upon leaders of all faiths to work together to ensure that religion and the name of the Lord will not be used to justify bloodshed and terror".
In an interview with the Italian newspaper La Repubblica, Abbas said: "Nothing should stop the search for solutions so that each of our peoples can live in a sovereign state."
The three will plant an olive tree that the programme calls "an enduring symbol of the mutual desire for peace between the Israeli and Palestinian peoples".
Patriarch Bartholomew, spiritual head of the Orthodox Church, is also attending. Francis invited him to show that the two main branches of Christianity can work together for peace.