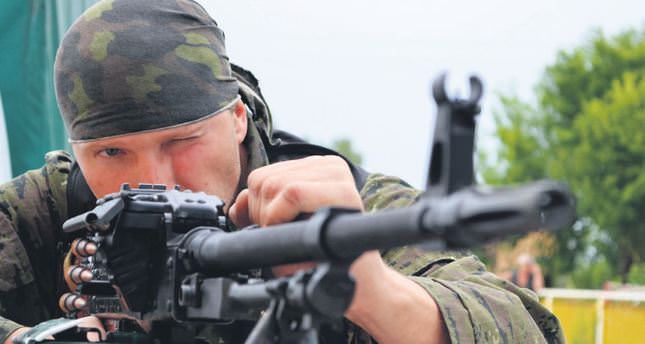 KIEV — President Petro Poroschenko yesterday said that a safety corridor would be created to allow civilians to flee the ongoing fighting in eastern Ukraine.

Tycoon Poroschenko's initiative meets a major demand put forward by Moscow and helps address growing concern among rights groups about Kiev's use of tanks and air power in heavily populated areas to suppress the pro-Russian insurgency.

But the 48-year-old chocolatier and political veteran stopped well short of accepting the Kremlin's request to allow Russian aid into the eastern rustbelt - a move Kiev fears could be used to help arm the rebels. "In order to avoid new victims in the zone of the anti-terrorist operation, the president has ordered the responsible ministers to bring about all necessary conditions for civilians who want to leave," Poroshenko's office said in a statement.

The new leader also told his government to provide transportation as well as food and medical supplies for local officials to be able to handle the expected inflow of displaced persons into other parts of Ukraine.

Russia said it welcomed Ukraine's decision to establish humanitarian corridors in the separatist east but stressed that Moscow has yet to see an easing of the Ukraine crisis. "We've heard that President Poroshenko spoke in favour of the creation of corridors for refugees. We welcome this," Lavrov said after talks with his German and Polish counterparts.

On Sunday Poroschenko unveiled plans to end by the close of his first week in office a rebellion that has killed more than 200 people and shaken the very foundation of the splintered ex-Soviet state.

The peace push came after the first of what are expected to be almost daily meetings with Moscow's ambassador to Kiev and a representative from the Organization for Security and Cooperation in Europe - a Vienna-based body that was first tasked with securing peace during the Cold War.

The government forces' campaign - dubbed an "anti-terrorist operation" by Kiev and a "punitive operation" by Moscow - has intensified since Poroshenko's May 25 election as the fifth post-Soviet president of Ukraine.

The fighting has engulfed two-economically vital regions that are home to 7 million people and that have extensive trade and cultural ties to Russia.

The battles are now primarily being waged along Ukraine's border with Russia and Slavyansk - a city of 120,000 that was the first of a dozen to fall under rebel command in early April.

A military spokesman said two Ukrainian soldiers were wounded in fighting around Slavyansk overnight. "The gunmen are continuing to try to break out of their encirclement," anti-terror operation spokesman Vladyslav Seleznyov said in a statement.

But human rights groups question whether Ukraine's growing reliance on artillery fire in Slavyansk and neighboring towns -- an offensive backed by Kiev's U.S. and EU allies -- is entirely justified. "Criminal conduct by the insurgents does not relieve the Ukrainian forces of their obligations to act in accordance with international law in the conduct of their law enforcement and military operations," Human Rights
Watch said in a letter addressed to Poroschenko.