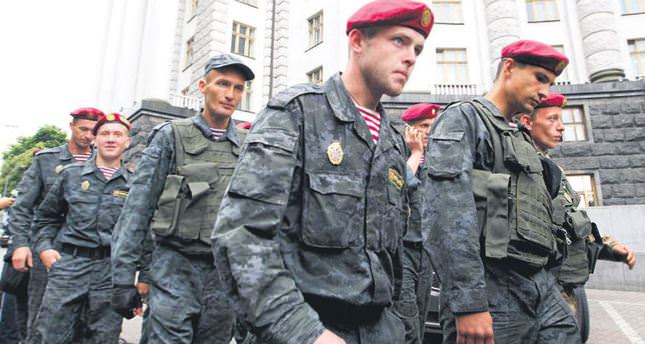 Pro-Russian rebels seized some Russian border crossings and also attack security forces at Lugansk Airport in eastern Ukraine yesterday. The border crossing near Dmitrovka village in the Shahtersk district of Donetsk, which was proclaimed as Donetsk People's Republic, fell into the hands of separatists, who reportedly settled into the houses in the village.

According to the Health Ministry report, at least 220 people including two children were killed since the onset of the clashes between rebels and Ukrainian soldiers in mid-April.

In another eastern province of Lugansk, pro-Russian rebels assaulted security forces at the city airport which they laid siege to in the last two days.

The separatists used howitzers, automatic rifles and rocket launchers in the early Wednesday attack. They retreated after the Ukrainian soldiers guarding the airport retaliated.

No official statements have yet been issued on any casualties from the attack. Tensions are running high in Ukraine's east after separatists in the two eastern regions declared independence from Kiev following Russia's annexation of Crimea on 21 March.

Western countries have blamed Russia for instigating the conflict in Ukraine and supporting pro-Moscow separatist groups and have sought to punish Moscow by imposing economic sanctions and excluding it from the G8 group. Ukraine's newly sworn-in President Petro Poroshenko, a billionaire confectionary oligarch who won a landslide victory in last month's presidential polls, said he will solve the instability in Ukraine by peaceful means and that nonviolent pro-Russian separatists will be forgiven.
Last Update: Jun 12, 2014 1:03 am
RELATED TOPICS