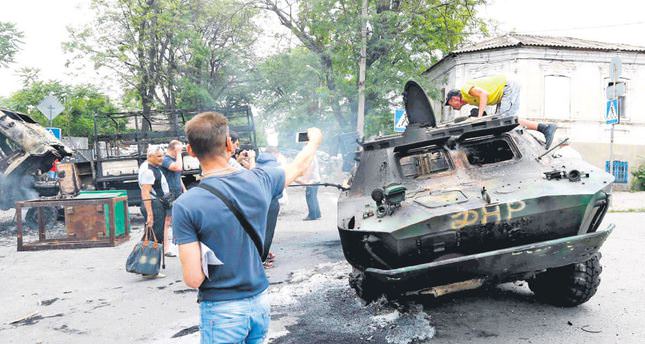 More than 40 fighters were killed near Stepanivka, a village close to the Russian border, the Defense Ministry said in Kiev. The ministry added that its troops destroyed numerous armored vehicles and two tanks that belonged to the separatists. Interior Minister Arsen Avakov said that militants had brought at least three tanks from Russia. Experts were, however, quick to point out that the separatists had probably taken the tanks from a Ukrainian depot, as photos and video footage showed vintage Soviet T-64 tanks that are no longer in service in Russia but still used by the Ukrainian armed forces. Avakov said Friday on Facebook that government forces had taken Mariupol back under control and hoisted the Ukrainian flag over the city administration building.

A separatist representative told the Russian Interfax news agency that five of their fighters were killed in the pre-dawn operation. Avakov said two soldiers were wounded and that 11 separatists had been arrested.

Control over Mariupol, an industrial city on the Sea of Azov, had been going back and forth between the separatists and commanders loyal to the government over the past two weeks. President Petro Poroshenko praised the "heroism of the Ukrainian military" in Mariupol and ordered the Donetsk regional administration to move its temporary headquarters there.

Governor Serhiy Taruta earlier moved his office from Donetsk to Kiev due to safety concerns. Taruta's government building has served as the headquarters to the separatist "Donetsk People's Republic" since its proclamation in early April. The leader of the Donetsk separatists, Denis Pushilin, said that a car bombing late Thursday was an assassination attempt against him.

"Our opponents are well known. This was most likely done by the Ukrainians," he told Interfax. Three people were killed and four wounded when the bomb went off. Among the victims was an aide and a bodyguard to Pushilin. It was the second attempt on Pushilin's life in the past two weeks.

Meanwhile, EU Energy Commissioner Guenther Oettinger said he expects gas talks between Russia and Ukraine to resume on Saturday. "My hope is that we can continue tomorrow," he told journalists on the margins of an EU energy ministers' meeting in Luxembourg, adding that he expects Ukraine and Russia to be represented by their energy ministers and the chiefs of their respective gas companies. The talks could be held in "Brussels or Berlin or Kiev or Moscow," he added.

The Russian energy ministry said later that no talks were planned for the weekend. "We are waiting for payment to be delivered by Monday morning," an unidentified ministry spokesman was quoted as saying by Interfax.

Russia has said that it will deliver gas only for pre-payment after a deadline that has been postponed several times - and is now set for Monday.

Also Friday, the European Commission released 250 million euros ($338 million, TL 719 million) to Ukraine as part of a program to support institutions and reforms in the country. The European Union has pledged a total of 11 billion euros to help Ukraine in coming years.

Meanwhile, Ukraine accused Russia on Thursday of allowing separatist rebels to bring three tanks and other military vehicles across the border into the east of the country to fight the Ukrainian army.

NATO head Anders Fogh Rasmussen said. "If these reports are confirmed, this would mark a serious escalation of the crisis in eastern Ukraine," Rasmussen said in a statement.

The secretary general repeated NATO calls for Russia to complete the withdrawal of troops it had massed on the Ukraine border and to halt the flow of weapons and fighters into the war-torn eastern part of the country.

The U.S.-led military alliance, along with the European Union, has consistently urged Russia to "de-escalate" the crisis, failing which it faces the prospect of even tougher sanctions than the travel and asset freezes so far imposed on Russian and Ukrainian figures blamed for stoking the conflict.
Last Update: Jun 14, 2014 1:12 am
RELATED TOPICS